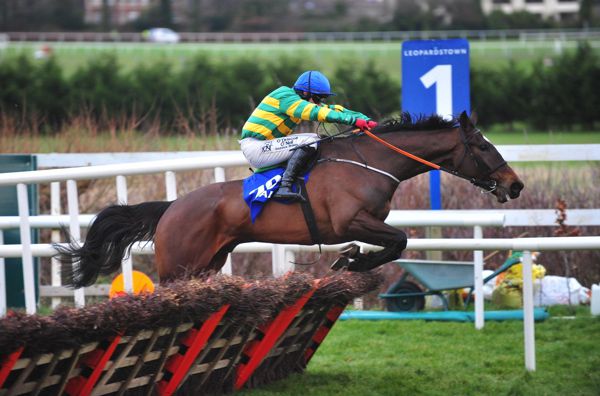 Off You Go
© Photo Healy Racing

The entries and weights for the handicap races at the Dublin Racing Festival at Leopardstown on Saturday, February 2nd and Sunday, February 3rd have been announced.

Charles Byrnes could well bid for a repeat win with Off You Go in the Ladbrokes Hurdle on the opening afternoon. The Co Limerick handler has also entered the highly progressive Wonder Laish in the €125,000 event that has attracted fellow hat-trick seekers Eclair De Beaufeu from the Gordon Elliott stable and the Tom Mullins-trained Court Maid.

The Elliott-trained Tombstone shares top-weight with his stable companion Campeador after taking third place in the Grade 1 Ryanair Hurdle at the Leopardstown Christmas Festival and not far behind him is the 2014 winner of the Champion Hurdle at Cheltenham, Jezki whose trainer Jessica Harrington has also entered Jetez, a winner over this course and distance at the Leopardstown Christmas Festival and a runner-up in the Grade 2 Moscow Flyer Novice Hurdle at Punchestown recently. Deal D’estruval, runner-up to Off You Go last year is one of nine entries made by Willie Mullins. A winner at Fontwell this month, Not Never has been entered by Gary Moore.

The €87,500 Matheson Handicap Chase is the first of five handicaps over the two days and leading the way with seven entries is Henry De Bromhead. Among his initial team is Three Stars, runner-up in the race last year, Tisamystery, a good winner over the course and distance at the Leopardstown Christmas Festival and Moon Over Germany who would be running in a handicap for the first time. A quintet of entries for the Gordon Elliott stable is headed by the consistent Cubomania while the exciting novice Articulum would be an intriguing runner for Terence O’Brien.

The opening race on the second day of the Dublin Racing Festival on Sunday is run in the memory of the legendary Paddy Mullins. The Irish Stallion Farms EBF Paddy Mullins Mares Handicap Hurdle has attracted 32 entries and the late trainer’s sons Willie and Tom have included the novices Sancta Simona and Court Maid respectively among their entries. The Tony Martin-trained Clementina is the winner of her last two races as is Honeysuckle which is unbeaten in as many runs for Henry De Bromhead. Alletrix, last year’s winner, and Rovetta have been entered by Jessica Harrington.

Runner-up in the Coral Welsh National at Chepstow late last month, the David Pipe-trained Ramses De Teillee is an interesting entry in the William Fry Handicap Hurdle where the Willie Mullins’ Total Recall could bid for a repeat success. Salty Boy, winner of the Tara Hurdle at Navan, could go well for trainer Mags Mullins while other recent winners Brosna George, Ronald Pump and course and distance scorer Cuneo would be lively contenders for Arthur Moore, Matthew Smith and Henry De Bromhead respectively. The Punchestown Festival winner A Great View could yet represent Denis Cullen.

The Liz Doyle-trained Last Goodbye scored a nine-length success over Joseph O'Brien’s Vieux Morvan in the €125,000 Abbey International Leopardstown Handicap Chase last year and both feature highly in the latest renewal. General Principle was fourth in the race in 2018 a couple of runs before he edged out Isleofhopendreams to land the Irish Grand National. They both could be among the runners for Gordon Elliott and Willie Mullins. Noel Meade’s impressive Ladbrokes Troytown Handicap Chase winner Tout Est Permis, successful in the Grade 2 Horse & Jockey Chase at Thurles on Sunday, tops the weights and also catches the eye at this early stage as do the Ted Walsh-trained Any Second Now, Enda Bolger’s Auvergnat, the Jessica Harrington-trained pair Magic Of Light and Whisperinthebreeze and the Grade 2 novice chase winner Some Neck, another trained by Willie Mullins.

Pat Keogh, Chief Executive of Leopardstown Racecourse, said: “The handicaps are a big feature of the Dublin Racing Festival. With such good prize money on offer we can look forward to some very exciting racing and we are very pleased with the quality of the entries.”