Weld and Hayes double up with Search For A Song 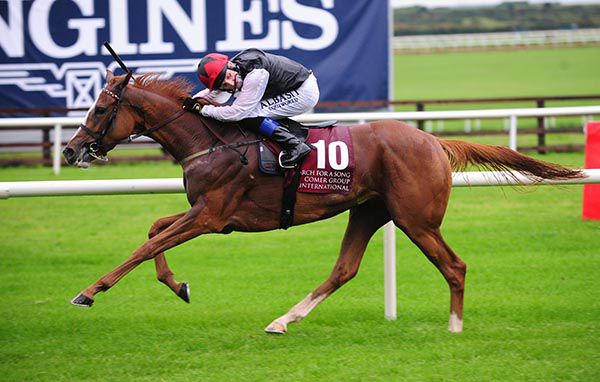 Search For A Song became the first three-year-old filly to win the Irish St Leger for 30 years.

She took the step up in trip to a mile and six in her stride to deliver at 10/1. Master Of Reality soon led at a sedate pace with Search For A Song racing freely towards the rear of the 12 runners.

Chris Hayes let Search For A Song make headway on the outer to close with a mile to travel and she hit the front off the bend with more than seven furlongs to negotiate.

She was still full of running with a healthy lead turning for home. She was still over two lengths clear with less than a quarter of a mile to travel as Hayes asked her for more.

The Galileo filly was ridden over a furlong out and stayed along the far rail as she toughed it out all the way to the line.

The winning margin was two and a quarter lengths from a staying-on Kew Gardens (7/2) for Aidan O'Brien.

O'Brien's Southern France was a length and a half further back in third at 9/1.

Dermot Weld said: “It’s a very special win on a very special and emotional day. We’re having wonderful horse racing but I’m very proud of our industry the way we are supporting Pat Smullen and cancer research.

“This has been a very special race for me over the years and it’s the eighth time I’ve won it.

“She was running very free early on and he’d a hard call to make. I was happy he made the right call because I didn’t want to see him spend the rest of the race trying to settle her.

“I know how well she stays so I wasn’t too worried. There is a lot of stamina there as her brother is Falcon Eight.

“She was very fit and very well and often horses that run that free will relax when they get to the front.

“Potentially she is a really high-class stayer. That was as good a St Leger as I’ve won when you look at the ratings of the horses in the race. The world is her oyster next year and there is huge improvement potentially in this filly. She loves fast ground.

“She put up an excellent performance at York and has progressed throughout the year. I’d say that will be it for this year, and hopefully she will make into a lovely four-year-old.”

Chris Hayes, after landing his second Irish St Leger, said: "I'm half shaking a little bit! Nothing went right for me - you go out in these races and you try and have a plan. I had a plan in my head and then I spoke to Pat (Smullen) before the race and he didn't say a whole pile but what he said gave me the confidence to trust in her once I had her in a rhythm.

"I knew after going a furlong I was going to be getting into a row with her - she's a beautiful, big-actioned filly and I just said there's no point. The most wide I was the whole way was three wide and I was just afraid I had done a little bit too much but they had to give me a lot of weight and I was able to get a good sit as she ran down into the straight.

"Once I straightened up and got to the two I gave her a kick and she strode on again and she actually quickened up which surprised me. She's a high-class filly."