Weld strikes at York with Search For A Song 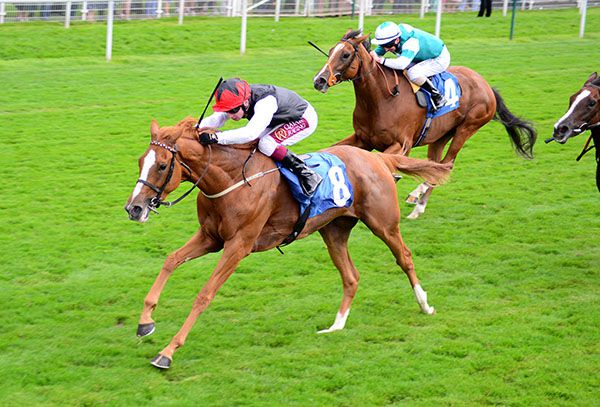 Search For A Song gave Dermot Weld a second victory in the British EBF & Sir Henry Cecil Galtres Stakes with a game display in the Listed race at York.

Weld took the prize in 2012 with Pale Mimosa and the Rosewell House trainer has a bright prospect in Search For A Song, who was having only her fourth career start.

A respectable fourth behind Star Catcher in the Irish Oaks, the Moyglare Stud-owned three-year-old travelled powerfully dropped in grade on her return to action.

Oisin Murphy brought her across from her wide draw towards the inside and was always prominent, with Frankellina and Spirit Of Appin close up.

Closely related to the classy Free Eagle and Falcon Eight, Search For A Song (3-1 favourite) pulled away in the closing stages to score by a length and three-quarters from Vivionn, with Spirit Of Appin a head away in third.

Weld said: “She did that very nicely. Oisin did a nice job getting her in behind the speed and she’s a nice staying filly. I was quite relaxed throughout the race.

“We’ll see how she comes out of the race before we decide where she goes.

“She’ll definitely be in Group company next, but I really see her coming into her own as a four-year-old.”