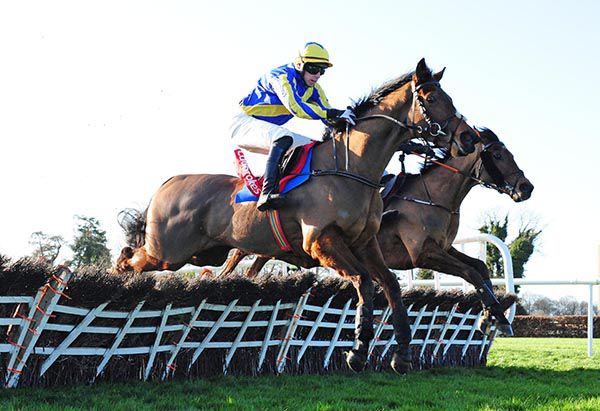 Joint favourite Oak Park was a narrow leader when coming down two out and fellow market-leader Instant Return took the honours in the opener at Punchestown, the Ladbrokes 'Where The Nation Plays' Maiden Hurdle.

Racegoers were treated to an exciting conclusion to this two miler with Instant Return (Paddy Kennedy up) getting the better of Politicise by a neck.

Third home Yafordadoe made a mistake at the last and his rider finished without irons, ten lengths back.

“He just gallops and stays. He didn’t jump as well today as he normally does," said Mrs Harrington.

“We’ll probably step him up to two and a half miles and go handicapping now. That will suit him well because all he does is gallop and stay.

“I’m delighted as he’s been knocking away and the Miller’s live close to me.

“He was meant to be sold as a yearling and then as a breeze up but he’s come good and won a race for them. They breed a few horses and sell them.”

A representative of Luke Comer, trainer of Three Comets (GER), reported to the Stewards' Secretaries that their charge scoped wrong post race.