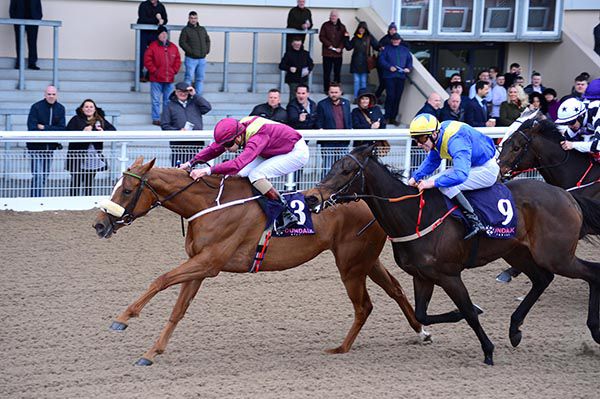 The Recruit Island Handicap was marred by an injury sustained by Georgian Bay over four furlongs at Dundalk, an event that went the way of Miss Snossyboots

Miss Snossyboots (9/4 into 5/4 favourite) with Ronan Whelan up for Michael Halford, got the better of Poitin (25/1) by half a length.

There was a length and a quarter then to Construct in third.

“She's very genuine. It's hard work out there today, facing into the headwind and the surface is quite slow,” said Halford.

“She was game to carry her ten stone and stick at it well. We'll tip away with her. She was in at Naas yesterday but I just thought the race today looked a bit easier.

“She's a filly, that in time, will step up in trip. She has a lovely temperament. Ronan said he never felt that he was going to get beat on her, she keeps pulling out more.”

Regarding the surface he added:- “It's riding very slow today. They are probably trying to compensate for the fact that it is tired. It needs replacing.”

The Stewards interviewed G.P. Brouder, rider of Poitin (GB), concerning his use of the whip in the closing stages of this race.

Having viewed a recording of the race and considered the evidence the Stewards were of the opinion that G.P. Brouder was in breach of Regulation 10 (f) in that he used his whip with excessive frequency, and having considered his record in this regard cautioned G.P. Brouder and reminded him of his future responsibilities.