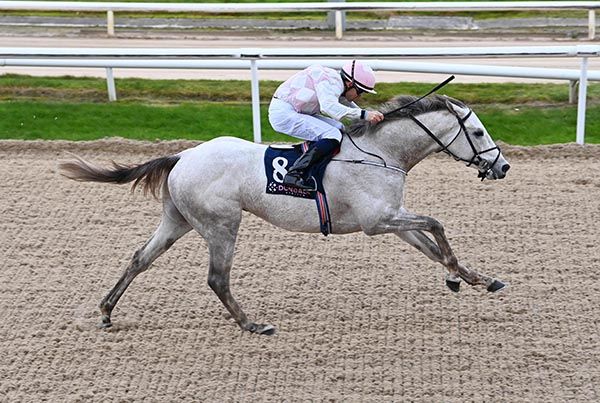 You would imagine owner/trainer John Murphy's phone will be busy after his White Birch (7/2) made short work of his rivals in the two-year-old maiden.

The grey son of Ulysses had shown distinct promise on debut at Naas on the final day of the turf season when fifth over a mile and had no trouble with the drop in trip or the faster surface here. Having sat second to Brasilian Princess he went past that rival inside the final quarter-mile and galloped on powerfully to account for her by six and a half lengths.

Winning rider Robbie Colgan said: “I thought after running over a stiff mile on heavy ground things might happen a bit sharp on this surface over seven but he jumped really well and seems to have a real good cruising speed.

“He galloped out really well and probably would have gone around again. I was delighted with the way it went.

“It was just a piece of work, once he popped really well. I had Jack (Kearney, on Brasilian Princess) giving me a lead, everything went smoothly, and he was all over him everywhere.

“It was just a case of when he was on his own in front would he lengthen out and he did.

“I think there is plenty of improvement, he was looking around at everything pulling up. He could be a real nice horse.

“He moved really well and felt like he loved it (surface). He's a fine big horse with a big stride on him and hopefully he could be anything.”