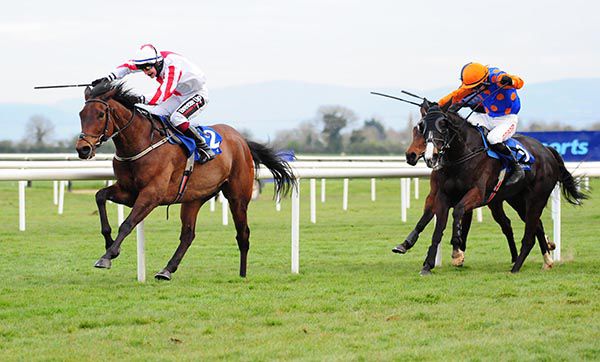 Danny Mullins was still looking good from the front here when his mount Thegoaheadman made a serious error at the last.

The Stayers’ Hurdle winning jockey did very well to stay aboard but Optical Confusion and Slevin didn’t need a second invite when the door was opened and they went on to prevail by a length and a half.

Agent Boru stormed home for second with Thegoaheadman (Mullins without irons) a short head back in third.

It was just a neck to Hoke Colburn in fourth.

“Obviously he was a lucky winner, Danny was unfortunate at the last, but that's the name of the game,” said Slevin after partnering Michael Butler’s scorer.

“He jumped well, travelled well and made one bad mistake down the back.

“I thought I'd pick him up at the back of the second last but he hasn't found a whole lot, he kinda did that the last day.”

Slevin’s earlier winner was Now Where Or When for Stuart Crawford.

The Stewards fined Mrs Denise Foster, trainer, €65 for failing to fit cheek pieces to Axiomatic, prior to entering the parade ring.

The Stewards interviewed J.J Slevin, rider of Optical Confusion, concerning his use of the whip in latter stages of the race. Evidence was heard from the rider concerned who accepted he was in breach of the rules and apologised for his actions. Having viewed a recording of the race and considered the evidence the Stewards found J.J Slevin to be in breach of R10.3 (g) and suspended him for 1 raceday.

The ground at Killarney is good to yielding (NH), and yielding to soft (Flat) following 3mm of rain overnight and a dry morning thus far.