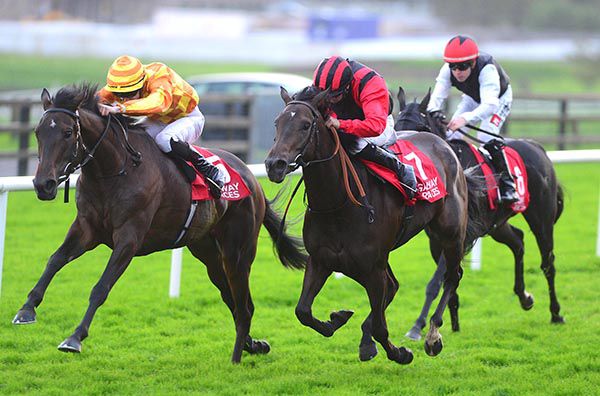 Those lucky enough to have put the four of them together were rewarded at odds of 659/1 as Joseph O'Brien's final runner of the night at Galway, Cascabel (6/4 favourite) brought up a four-timer for the yard in the Sean Cleary Memorial Fillies Maiden.

Niall McCullagh on Baby Pink and Shane Crosse on Elleanthus and Song Of The Sky did the needful earlier for the Carriganog Racing team.

O'Brien's brother Donnacha was entrusted with the spin on Cascabel, and the championship leader book-ended the card himself having landed the opener on his father Aidan's Sovereign.

Cascabel's attitude was exemplary, as in tough conditions she just wasn't to be denied, eventually accounting for Endless Tangent and Bridge Native by a head and half a length.

There was a length and three quarters then to Chateau La Fleur (7/2 into 9/4) in fourth.

"It's nice to get a win into her as she is well bred and has been banging on the door the last two times. She was probably a bit unlucky here in Galway two runs ago and today when I got stuck into her she found a bit," said Donnacha O'Brien.

The going at Navan for today's meeting remains yielding with a dry weather forecast.