A good week for Enright continues at Downpatrick 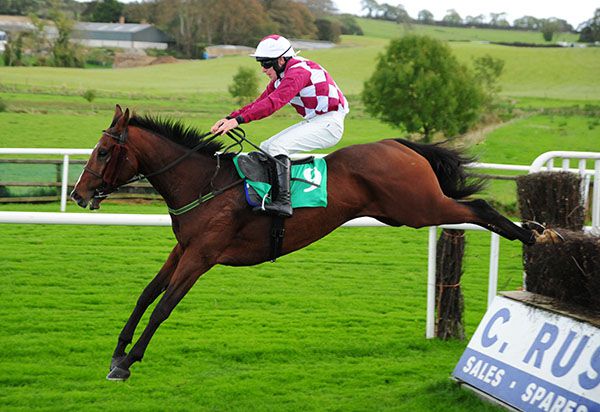 A generally tough day for winner finding at Downpatrick got no easier when 20/1 chance Stylish Moment came to the fore in the Molson Coors Beginners Chase.

Fresh from a double on Super Sunday at Tipperary, Phillip Enright steered the successful Milan gelding for Eoin Doyle.

Favourite Ar Eagla Na Heagla had every chance two out but Stylish Moment soon put in a race winning spurt.

Try as they might on the run-in the pursuers weren’t getting there.

Stylish Moment eventually had two and a half lengths and three parts of a length in hand over Guided By You (6s into 4s) and the aforementioned Ar Eagla Na Heagla.

Bred by Jim Mernagh at Coolamurry Stud in County Wexford, Stylish Moment was formerly with Alan King in England, and here he was shedding his maiden tag at the 15th attempt.

"I spoke to Eoin Doyle this morning and Michael Butler who works for him and they just told me that he jumps well and to give him a cheery ride up towards the pace. He jumped and travelled well and he stayed on up the hill well," said Enright.

"He has handicap form, he ran in handicap chases in England and he ran in a handicap in Tramore the last day, and it stands in a beginners' chase like that. He got the trip well.

"You could (see him coming back here next year) - a lot of Eoin Doyle's horses run well around Tramore up and down hills so it suits them. He climbed the hill well there the last day."

The Stewards requested a report from Eoin Doyle, trainer as to the apparent improvement in form of Stylish Moment, placed first, as compared with its recent form.

Evidence was heard from Mikey Moran, authorised representative, who stated that Stylish Moment had raced in a much better grade of race on its previous run and that this was a significant drop in class.

Having considered the evidence the Stewards noted the explanation given.

Charlie Appleby and William Buick were back in France on Tuesday to win the Prix du Lys with the progressive Volkan Star at ParisLongchamp.