A winning start from Elusive Rain 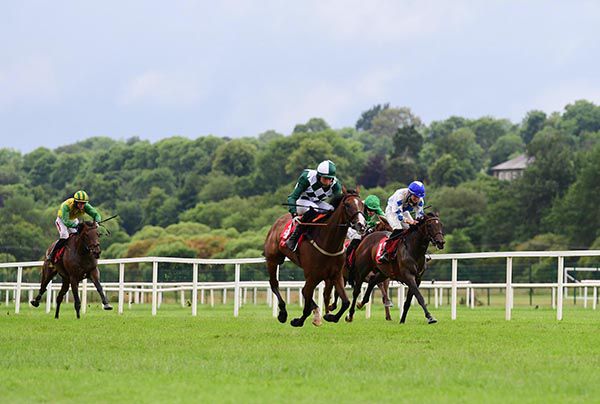 Elusive Rain (3/1 joint favourite) made a winning debut in the Charleville INH Flat Race at Cork for Byrnes brothers Cathal and Philip.

Elusive Rain chased the leader, and led after half a mile. Ridden two furlongs out, the four-year-old was clear over a furlong out, keeping on in the final furlong. He had a reduced advantage close home and held off Hi Stranger by a length and a half.

"I bought him at the flat foal sales for E3,500 but he's not a big horse and you wouldn't want to go much more than that for him. We had him ready to run last year but he had a slight setback so we decided to keep him for a bumper,” said Cathal Byrnes.

"He goes well at home but the ground was a concern. We'll either go for a flat maiden or a winners' bumper now and he has done plenty of schooling."

The Stewards interviewed Mr J. Hart, rider of Oneforpaddy, concerning his use of the whip in the closing stages of this race. Evidence was heard from the rider concerned who accepted that he was in breach of the regulation and apologised for his actions. Having viewed a recording of the race and considered the evidence the Stewards were satisfied that Mr. J. Hart was in breach of Regulation 10.3.b, the unnecessary hitting of a horse after its chance of winning or being placed is clearly gone. Having considered Mr. J. Hart's record in this regard the Stewards suspended Mr. J. Hart for three racedays.