Aldo The Apache cuts down rivals 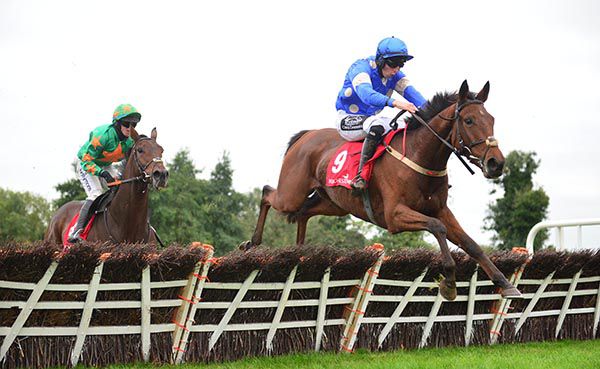 The lightly-weighted Aldo The Apache was a convincing winner of the Punchestown Annual Membership Handicap Hurdle in the hands of substitute rider Eoin Walsh.

The Shantou gelding, who landed a maiden hurdle at odds of 66/1 at Down Royal in June, was settled in mid-division before making headway after the second-last.

In front on the run to the final flight, he went away to account for Whatsnotoknow by six lengths with Marajman another two and a half lengths away in third.

Owned by the Room For One More Syndicate, the winner is trained by Colm Murphy.

Winning rider Eoin Walsh (fourth winner this month) said: “He’s a real strong stayer and will probably stay further. Colm (Murphy) rang me beforehand and told me he stays well. He jumped like a buck today.

“It’s unfortunate for Mike O’Connor who broke his collarbone (brought down on Yulong Voice here) yesterday. It’s his ride but someone’s misfortune is someone else’s gain.”