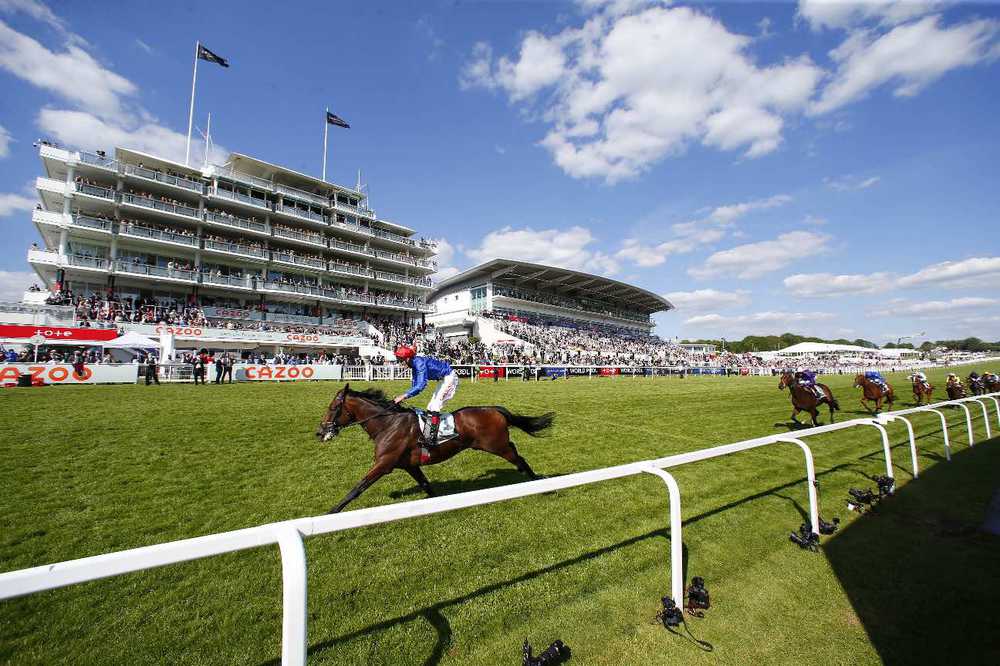 In what seemed a golden era for Flat racing in the early 2000s, Godolphin took on Coolmore on a regular basis and when Love and Adayar clash in Saturday’s King George VI And Queen Elizabeth Qipco Stakes, the two heavyweights will cross swords once more.

While it is far from a two-horse race — indeed five of the six runners are already Group One winners and the only one yet to bridge that gap, Martyn Meade’s Lone Eagle, was a narrow runner-up in the Irish Derby — they nevertheless dominate the betting.

Adding to the sense of nostalgia is the fact that 20 years ago the subsequent supersire Galileo was the last Derby winner to take the race, a feat Adayar is attempting to emulate this weekend.

Adayar is by Frankel, Galileo’s greatest son, yet Galileo beat Fantastic Light, one of Godolphin’s all-time greats, but it will be Adayar sporting the famous blue silks this time.

“We always felt, from 24 hours after the Derby, that we’d go to the King George because he’s a big individual who needs a gap between his races and it would give him time to develop,” said trainer Charlie Appleby, who has an embarrassment of riches among his three-year-olds.

“This season has gone fantastic. Going into the winter we felt we had a nice group of two-year-olds, without having had a Group One winner, but they had nice pedigrees and were nice individuals.

“We hoped as three-year-olds they would progress and they’ve duly obliged. They’ve been in great form all season, starting with Creative Force who progressed through handicaps to win the Jersey and run well in the July Cup.

“Then we had the likes of Hurricane Lane, Adayar and Yibir all campaigning in the trials. Some won, some ran very well but thankfully they progressed from their trials which is important.”

Most yards would love to have a runner in the Derby but unless you are Aidan O’Brien with a yard stocked full of Galileo’s offspring, actually having one is still an achievement. This year Appleby had three.

“The one race everybody wants to win is the Derby so that was the focus going into the spring. We hadn’t had a runner in the Derby since Masar (2018 winner). Thankfully as the years have gone on I’ve got a handle on what you need to compete at the top level. I never want to go to just make up the numbers,” he said.

“This year we felt we had the stamp of horse to be competitive, certainly going into the trials and His Highness (Sheikh Mohammed) said through the winter to build towards the Derby and if we thought we had three, to run three.

“We started the spring with five potential Derby candidates and we ended up with three and they all ran very creditably finishing first, third (Hurricane Lane) and One Ruler was sixth.

“We had the conversation with Sheikh Mohammed before the Derby about running the three and I won’t run away from it, I felt the one horse who would be suited stepping up in trip was going to be Adayar and that he was more a St Leger horse. His Highness said that if he was fit and well to run, as the one thing you need to do is stay in the Derby.

“Hurricane Lane had won the Dante, he was an unbeaten son of Frankel, he was our number one and thankfully he’s justified where we thought he was in the pecking order — at the top. One Ruler had a question mark stepping up in trip but we had done it with Masar and he didn’t look out of place in the Derby.

“But, a few of the wise old heads fancied Adayar. He’d run in two trials and not done a lot wrong, he wasn’t beaten a long way in either and with the way the ground turned, he had to be a possible.

“He’s a gentle giant, you wouldn’t want him to throw his weight around as he’s a big lad, Josh (Crane) his rider from the spring onwards has done a fantastic job. His home work is no different to what it was prior to Epsom, he’s a nice, honest galloper who covers a lot of ground.”

It is rare for a Derby winner to run in the King George these days, though Enable and Taghrooda took advantage of the huge age and sex allowances as Oaks winners for John Gosden in recent years, but Appleby has always been pointing toward the midsummer showpiece.

“It’s going to be a fascinating race, we’ve discussed with His Highness where we place Hurricane Lane after his win in the Grand Prix de Paris and while it’s a cliché, we’re sitting on the fence waiting to see what Adayar does to see where these Classic horses go in the second half of the season,” said Appleby.

“I’m delighted with his preparation going into the race. There are six runners, it looks like there’s some pace and if you want to dig deep into form, Love is a deserved favourite. We’re second favourite and with the allowance, I think the market is about right. Love should be favourite but we should be bang there.

“Whoever wins it is king of the mile-and-a-half division for the foreseeable future.

“Year in year out, we always get told it wasn’t a classic Derby or the three-year-olds look weak but it always sorts itself out from the Eclipse onwards.

“When Masar won they questioned the strength of it, then Roaring Lion came out and won the Eclipse and the Juddmonte — I don’t know what more horses have to do sometimes.

“As it stands at the moment it looks a good Derby. He won by three and a half lengths and the third horse came out and won a Classic and the Grand Prix de Paris emphatically.

“It’s fantastic being part of these races, helping to produce the goods on the day is a great honour and he’s my first runner in the King George. More importantly he’s not just a runner, he’s a Derby winner. To win it, it would be a lovely feather to have in the cap.”

There was a thrilling finish to the Claytonhotelgalway.ie 3-y-o Handicap with Black Cat Bobby (14/1) coming out on top under a fine ride by Gavin Ryan.