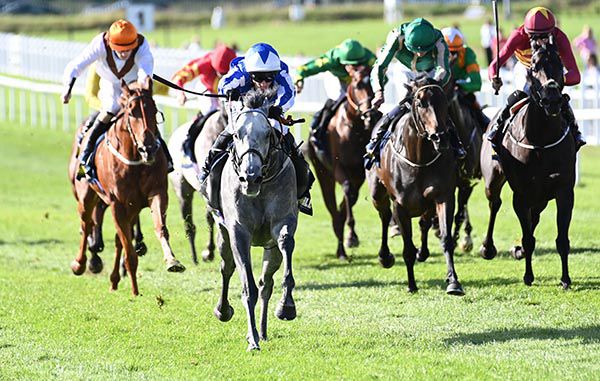 Art Power appreciated a drop in class when taking the Group 3 William Hill Ireland Renaissance Stakes in runaway fashion at the Curragh.

The Tim Easterby-trained colt, last successful in the Lacken Stakes at Naas over a year ago, has been running well in Group 1 company all this season including when beaten less than two lengths in the Darley July Cup and again last time in the Betfair Sprint Cup at Haydock.

The 4/5 favourite took command from over a furlong out, drawing clear for David Allan to beat Twilight Spinner by an impressive five lengths with Measure Of Magic a further half a length away in third. David Allan said, “He travelled very strongly through the race, quickened up and ran through the line strong.

“Obviously it’s a bit of a step down in class for him. It might do his confidence good and hopefully he’ll pick up a big one soon.

“He loves Ascot and I think Champions Day will be the target for him. He goes on that ground but a bit of juice in the ground would suit him.

“The biggest job is reining in his speed early on to get him a bit more control and then he’ll run through the line.

“He doesn’t need to make the running and as long as he travelled I was happy.”

Paddy Power cut Art Power into 8/1 (from 12/1) for the British Champions Sprint at Ascot.