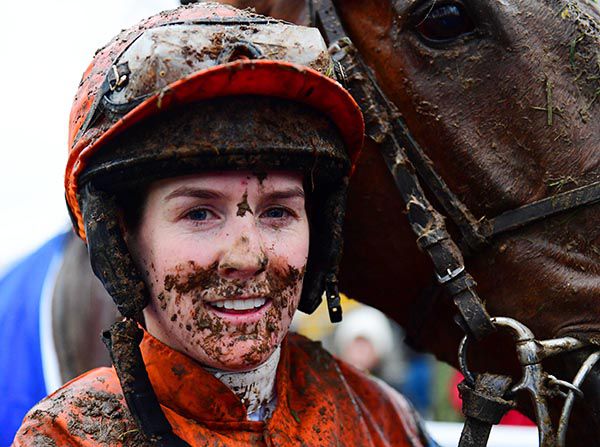 Gigginstown recorded a 1-2 in the Ladbrokes Best Odds Guaranteed Maiden Hurdle at Punchestown but not in the order that most would have anticipated as Baptism Of Fire got the better of the odds-on Wide Receiver.

However, the favourite was far from fluent at the last and the Henry de Bromhead-trained Baptism Of Fire (6/1-9/2) took full advantage finishing strongly on the run-in to get up close home.

Rachael Blackmore’s mount scored by a length and a quarter, with Valentina Lady keeping on well just a length further back in third.

Blackmore said, “He had to really battle there at the end and is a real stayer. It was a lovely first run.

“He won his point-to-point for Denis Murphy and loves jumping. I’d say he’s going to be a real staying horse.”

The Stewards enquired into the running and riding of Eileens Boy, owned, trained and ridden by Mr A.H. Wells. In his evidence he stated that his intention was to jump off up with the pace and to do his best. As the race commenced he took up the required position in running but hit the first hurdle hard which knocked his mount back to mid division. He felt that the pace was steady throughout and he rode his mount on the outside to give him daylight and confidence. He added that his mount took a heave and a blow at the end of the back straight and no pressure was applied in order to give his mount a chance to get his second wind. At that time he had considered pulling up but his mount began to pass tired horses and finished real strong. On further questioning, he admitted that his mount was a stayer, and a good jumper. He further admitted that he only made a real and noticeable effort about 150 yards from the finish having jumped the final hurdle. The Stewards also received a report from the Irish Horseracing Regulatory Board Veterinary Officer who stated that Eileens Boy was post race normal. Samples were taken for analysis. Having viewed the recording of the race and considered the evidence, the Stewards were of the opinion that Mr A.H. Wells was in breach of Rule 212(A)(ii). Having taken his previous clean record into consideration, the Stewards fined Mr A.H. Wells €3,000 as the trainer of Eileens Boy, suspended Mr A.H. Wells for 21 race days as the rider of Eileens Boy and suspended Eileens Boy for 60 days as a consequence of the actions of Mr A.H. Wells both as the trainer and the rider.