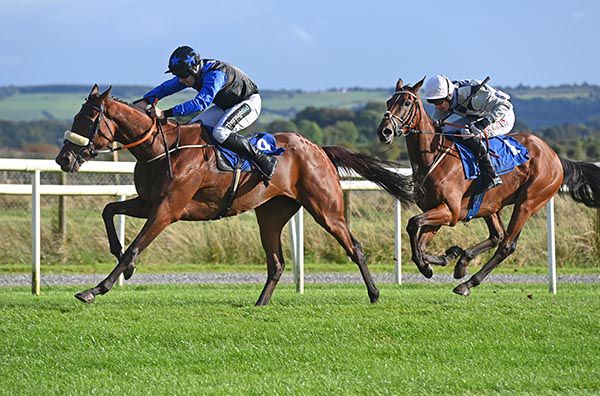 O’Neill, who was successful earlier on De Lady In Red, bided his time in mid-division on his strong-travelling mount who appeared to jump a shadow shortly after turning into the home straight for the final time.

He was quickly back on an even keel and soon challenged the 15/8 favourite Ballyglass.

The scopey bay, from the family of smart chasers Take The Stand and Sheltering, forged clear in the final furlong to beat the market leader by a length and a half, with the front two clear of the remainder.

Winning trainer Peter Fahey said: “He's a nice horse. He does everything fairly right at home.

“Hopefully he got away with that ground today as he's definitely a horse that will go with a bit of ease in the ground.

“We won't over-face him, we'll probably give him a little bit of time and go for a winners bumper in a few months time. We'll keep him to bumpers for the minute.

“He's bred by Padraic Ryan who has a good few horses in the yard. This (Money For Jam) syndicate bought him and hopefully he'll be a nice horse in time.”