Blackmore gets the fractions right as Militant springs shock 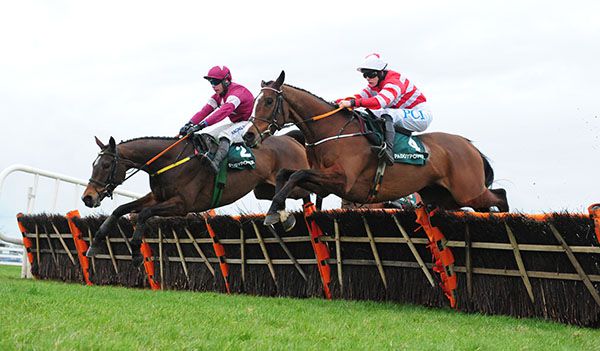 Jason The Militant hung on at the line to cause a 25/1 shock in the Paddy Power Betting Shop Novice Hurdle at Naas this afternoon.

The Sans Frontieres gelding was given a fine front-running ride by Rachael Blackmore as he gained a narrow victory in the Grade 2 event. Andy Dufresne was sent to post a 6/5 shot in the contest, over just shy of two miles, but came under pressure jumping the second last.

Jason The Militant got his rivals off the bridle there and it was Beacon Edge who was the big danger going to the final flight.

A slight mistake at the last by that rival gave Henry de Bromhead's charge the slight advantage and he stuck his head out gamely on the run to the line, clinging on by a nose at the post.

The winner had finished a remote fifth behind Asterion Forlonge in Grade 1 company at Leopardstown earlier in the month having previously won his maiden hurdle at Limerick over Christmas.

De Bromhead said:- “We were disappointed with him at Leopardstown but I think he just loves the soft ground.

“Peter (Michael, owner/breeder) came up with those tactics and suggested we try and nick a few lengths at the start if no one wanted to go on. Rachael executed the tactics brilliantly.

“He was third to Envoi Allen in a bumper on goodish ground and that seemed to jar him up a bit. It took him a while to come back.

“We’ll look for something wherever there is proper soft ground.”