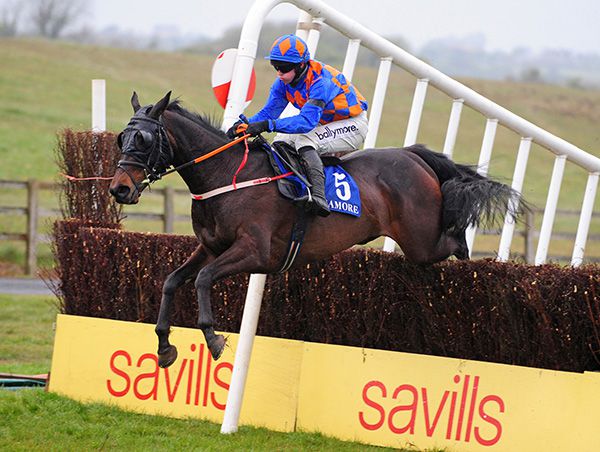 The seven-year-old gelding sported first-time blinkers and made his first venture into handicap company.

He made most for Darragh O'Keeffe and moved a few lengths clear with a circuit to race.

With less than five furlongs to go, he jumped the third last nicely and began to crank up the pressure on his pursuers.

He was on good terms with himself jumping two out clear from Wake Up Early who made a mistake and lost momentum.

The well backed 18/5 favourite jumped the last well and hit the line in total control. Wake Up Early plodded on for second at 6/1 and was 21 lengths in front of Tropical Stream (13/2).

O'Keeffe said: "I had ridden him a few times before and I was third on him one day in Navan behind Dreal Deal.

"I'm surprised it has taken him this long to get his head in front. He is a brilliant jumper. He travelled great and jumped great and the blinkers were a big help to him today.

"The plan was to be very positive and David said to just keep the revs up.

"I'm delighted for his owners that he is after getting his head in front now and I think they will have a bit of fun with him for the summer. I think the nicer ground and the blinkers were a big help to him."

Christie added: "He has loads of ability and has been working with all my good horses. The last day when he ran at Leopardstown he was looking all around him and not even concentrating, so I decided to throw on a set of blinkers and it has just changed him inside out.

"We will see what we get from the handicapper and go again. He is not a big horse so he will suit all the summer tracks because he can scoot around them.

"He surprised us in the winter time because he ran well on softish ground at Punchestown and we couldn't get over how well he ran. He really likes good ground so summer holds no fears for him."

It is 50 years since Mill Reef provided Kingsclere with its most famous moment by winning the Derby for Ian Balding — and there will be no more popular winner should his son Andrew repeat the trick with Youth Spirit next month.