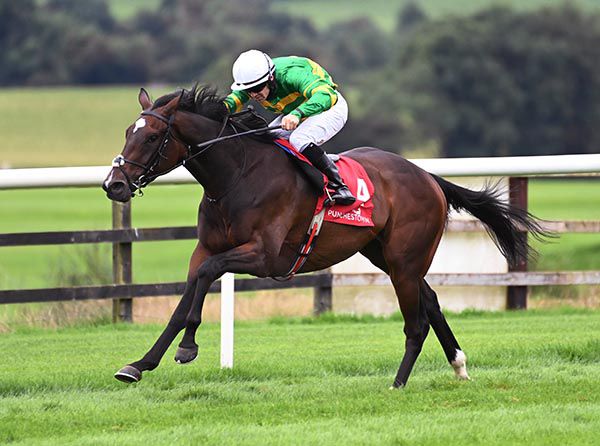 Third and fifth in two starts last year, the son of The Gurkha finished a good third on his return to action at Galway in July.

Expected to make the breakthrough this afternoon, the Joseph O'Brien trained gelding was sent off the clear market leader at 4/6.

Settled behind the leaders by Lordan, the bay victor got a dream run through on the inner from early in the straight.

He hit the front with over a furlong left to go and was ridden out in the closing stages, coming home three-and-a-half lengths to the good.

Brendan Powell, assistant trainer to O'Brien, said: "I don't know how good of a race it was but he did it well and was doing his best work at the end of the race.

"He's going to stay further and he's got his head in front now.

"Wayne said he was a bit slow away but got into a nice position the whole way and stayed on well, he basically outstayed the others."

L.T. McAteer, rider of Midnight Traveller trained by James McAuley, reported to the Clerk of Scales that his mount hung badly left from about four furlongs out.

G.P. Halpin, rider of Kilmallock Lady trained by John Geoghegan, reported to the Clerk of Scales that his mount reached for the ground and stumbled at the end of the back straight.

O.J. Orr, rider of Rural Capital trained by Mark Fahey, reported to the Clerk of Scales that his mount was slowly into stride on leaving the starting stalls.

R.P. Cleary, rider of Cliffs Of Malta trained by Anthony Mullins, reported to the Clerk of Scales that his mount hung a little in the straight.

The Stewards reviewed an incident at the end of the back straight where it appeared Kilmallock Lady stumbled and lost ground. Having reviewed the video of the incident and considered the matter, the Stewards were satisfied that no action was warranted.