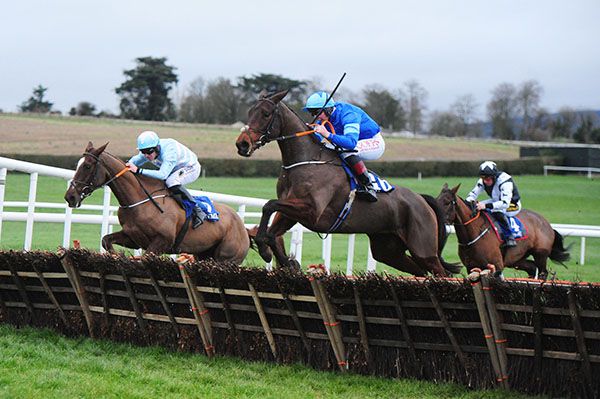 Henry de Bromhead doubled up at Clonmel this afternoon when Sailingtobyzantium led home a one-two for the yard in the concluding amateur maiden hurdle.

The daughter of Gold Well had been placed in two point-to-points but had fallen early on her 'track' debut in a maiden hurdle at Thurles last month.

Stable-mate Arahecan, a 5/1 shot, had hit the front going to the fifth last flight but was passed by 25/1 chance Sailingtobyzantium early in the straight.

The eventual winner looked a touch green, under Tom Hamilton, and lost her lead again at the second last.

Hamilton got her back on terms going to the last, however and she secured a narrow lead over the final flight, going on to post a three-parts-of-a-length win over Arahecan.

Braeside, who had been under pressure from three out, stayed on again late on to get within a neck of the runner-up.

"She stayed at it very well, Tom was brilliant on her because it took her a while to warm up her jumping,” said de Bromhead.

"They both ran well and Arahecan might have run with the choke out a little bit but he ran really well as well.

"She had good form, is a very well bred mare and Eamonn (McGuinness, owner) had her point to pointing last year.

"She had been working nicely but it was a surprise. She had a nasty fall the last day and made mistakes today but Tom was very good on her and he really nursed her around for the first circuit.

"Arahecan could drop back in trip in another maiden hurdle and I'll have to look for black-type options for the winner."