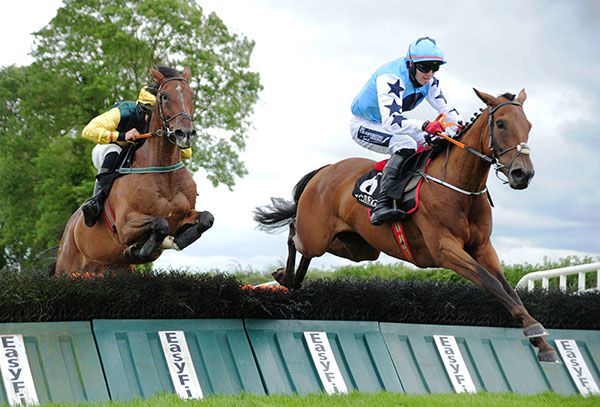 Empirion (7/2) was strong in the betting since the morning and he duly obliged in the KilbegganRaces.com Maiden Hurdle.

The Court Cave gelding, rated 90, came through to lead before the last and went on, under Keith Donoghue, to beat outsider Dave And Bernie by four and a half lengths.

Cousin Harry was third, a place ahead of 5/2 favourite Samba Dancer, with fancied hurdling debutant Railway Hurricane departing at the first.

Empirion had a few non-completions over fences last season, but showed up reasonably well in a couple of handicap hurdles at Fairyhouse and that form gave him claims in this ‘unplaced’ maiden.

Winning trainer Matthew Smith, successful at Galway on Friday evening with Mindsmadeup, said: “He jumps well but maybe over the winter out of the heavy ground he was finding it harder over fences. He was a bit weak as well.

“It’s nice to get a win into him as he works well and I’d high hopes for him a while back.

“It wasn’t the best looking race and I’d have been disappointed if he hadn’t won today. I’m not sure about plans but he’ll probably stick to hurdles for the minute.”