Enjoy the word as Murphy puts 1st winner on the board 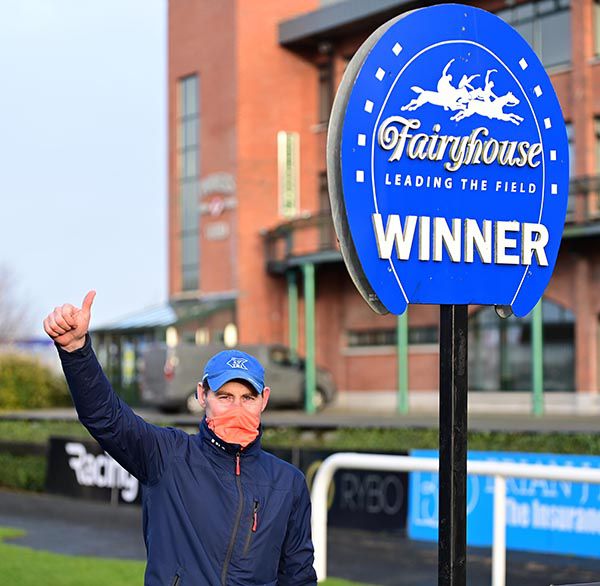 Of course previous licence holder at Charlestown Stud in County Westmeath, Dot Love, recently signed off in her ‘own race,’ at this venue, with Flindt, nearly a fortnight back.

The Conor Orr-ridden victor was getting the upper hand on Lean Araig when that one ‘missed’ the last.

Enjoy D’allen, a former Peter Fahey inmate, with a first-time tongue-strap on here, then went away to triumph by six lengths.

“I thought he was in trouble and Conor said he didn't enjoy the ground today at all, he probably wants a bit of nicer ground.

“He's going to be a spring horse over those extended trips. We're just delighted to win with him today and we'll move forward from here.

“He might be a nice horse for handicap on spring ground. We'll see what the handicapper does.”

Owing to structural damage, the Stewards granted permission for fence #10 to be omitted from this race

S.W. Flanagan, rider of Bois De Clamart (FR) trained by Miss Elizabeth Doyle, reported to the Clerk of Scales that his mount made several mistakes.

The Irish Horseracing Regulatory Board Veterinary Officer examined King Alex (FR), trained by Barry Connell, at the request of the Stewards and reported the animal to be blowing hard post race.

Cheltenhamguides.com all you need to know about the horse racing Festival

The Cheltenham Festival is the pinnacle of National Hunt racing. Set across four fantastic days, 28 races bring about tons of betting opportunities with tens of millions traded online and at the track.

This year’s Randox Grand National meeting will take place in its scheduled slot after Jockey Club Racecourses ruled out delaying the Aintree showpiece.

Heavy penalties meted out to Murphy father and son at Thurles

The performance of Winter Fog, 5th in the I.N.H. Stallion Owners EBF Maiden Hurdle at Thurles today, saw handler Donie Murphy, and his son amateur rider James, in hot water with the stewards.

Industrious Codd puts trip to Tipp to very good use