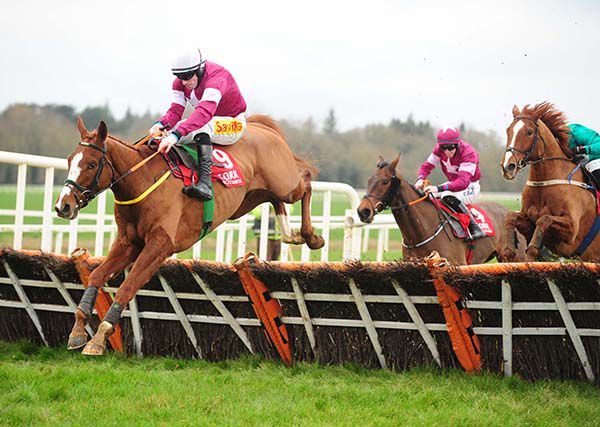 The 2019 Annual Membership Now Available Maiden Hurdle was marred by the fatal fall of favourite Clinton Hill at the third last flight and the honours in the three miler eventually went the way of Eurobot (11/2) at Cork.

Under Sean Flanagan the son of Malinas made the perfect start in Ireland to account for Getaday and the other Gigginstown runner, Invincible Cave, by three and a quarter lengths and six and a half lengths.

"I'm going to get slagged by the Gigginstown manager (Eddie O'Leary) now as I had him down six weeks ago and said he was useless and was too slow. He said the last fella that told us that, it turned out to be a good horse and to run him! That other horse turned out to be a real good horse (Quito De La Roque)," revealed Meade.

"He wouldn't actually show you an awful lot at home but he stays really well. He jumps really well and is really a chaser in the making. I'd say he is still immature and he probably will keep improving but he will be a nice staying chaser.

"It was a surprise and Willie's (Mullins, Clinton Hill) probably would have won but they have to stand up to win."

Under the provisions of Rule 90, the Stewards allowed Dare To See, trained by W.J. Martin, to run on receipt of the trainer's written assurance that the error identified in the certification of vaccinations would be corrected in accordance with Rule 91 within the timeframe specified.

R.M. Power, rider of Castlebrook trained by James Joseph Mangan, reported to the Clerk of Scales that his mount was badly hampered three out.

C.D. Maxwell, rider of Angelic Moon trained by Sarah Dawson, reported to the Clerk of Scales that his mount stopped quickly down the back.