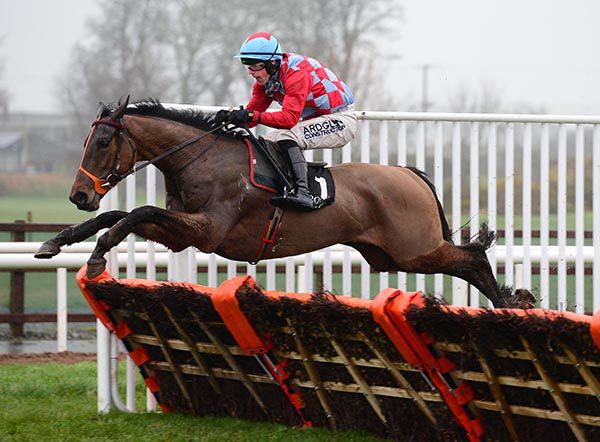 In the colours of his wife, Patricia Hogan, Philip Fenton sent out Groody Rover to register an impressive success in the Cleary Contracting Ltd Novice Handicap Hurdle at Down Royal.

Following up on a Clonmel success from nearly a fortnight back, Groody Rover was again partnered by Brian Hayes.

In much the same way as he did when winning a point-to-point, the successful Milan gelding was good from the front on this occasion.

Groody Rover was eased on the run-in and still had eleven lengths to spare from Magic Sea.

"Brian (Hayes) had made up his mind before they went out that if there wasn't going to be pace he would make the running," said Fenton.

"I'd say tactics played a big part. He jumped pretty well having lots of experience from point-to-points, so credit to our jockey.

"Those couple of jumps (at the last two hurdles) probably made him as impressive as he was.

"Let's hope he is improving.

"I'm sure Fairyhouse would come into the reckoning, a novice handicap in Fairyhouse or Cork on Easter Sunday.

"We'll see what the handicapper does, we thought he was harsh enough on him with a 120 of a rating. You can't disagree with him (now)."

C.D. Maxwell, rider of Mc Alpine trained by P.J. Rothwell, reported to the Clerk of the Scales that his mount stopped quickly and pulled up.

The Irish Horseracing Regulatory Board Veterinary Officer examined Mc Alpine, trained by P.J. Rothwell, at the request of the Stewards and reported the animal to be post race normal.

British Champion Flat Jockey Oisin Murphy has been banned for three months by France Galop after testing positive for metabolites of cocaine.

Epatante 'up and ready' for Fighting Fifth return

Nicky Henderson reports Epatante ready to start her road back to Cheltenham when she makes her seasonal debut in the Betfair Fighting Fifth Hurdle at Newcastle.

I am really looking forward to Honeysuckle getting her season under way in the Baroneracing.com Hatton’s Grace Hurdle. She won it well last year and went on to have a great campaign, maintaining her unbeaten record in that brilliant Mares’ Hurdle at Cheltenham after a fantastic duel with another great mare Benie Des Dieux.

Honeysuckle bids to take her unbeaten record under National Hunt rules to nine when she goes for back-to-back victories in the Baroneracing.com Hatton’s Grace Hurdle at Fairyhouse on Sunday.