Gamble goes astray as well-bred Welcome get his turn 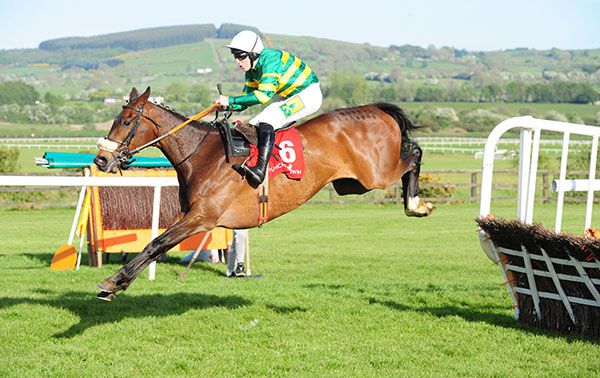 A significant gamble on The Reaping Race went astray, as Hero's Welcome made the breakthrough in the Next Race Day 12th June Handicap Hurdle.

Available at 20/1 this morning The Reaping Race opened on-course at 8s, before going off the 7/2 favourite under Donal McInerney for Eric McNamara.

Towards rear for the most, the market leader was short of room on the inner approaching four out, and never really looked like winning, eventually coming home in ninth.

Hero's Welcome went in the other direction in the market, and having been as short as 7/2 in early shows, he was returned at 7s.

In front from the second, the Tony Martin trained victor, who is a half-brother to Lord Windermere and Sub Lieutenant, clearly appreciated this step-up in trip to two mile seven.

He had all his rivals off the bridle from two out, and kept up the gallop from the last, going on to score by three and three parts of a length under Jody McGarvey.

Martin, who trains the winner for JP McManus, said afterwards: "He was due one of them. He ran well at Navan the last day but stopped after the last and I don't know why. It was nice to see him do it today and he did it well.

"I don't think the ground matters to him, and he should be suited by a fence in time."

* The Irish Horseracing Regulatory Board Veterinary Officer examined The Reaping Race, trained by E. McNamara, at the request of the Stewards and reported the animal to be post race normal.