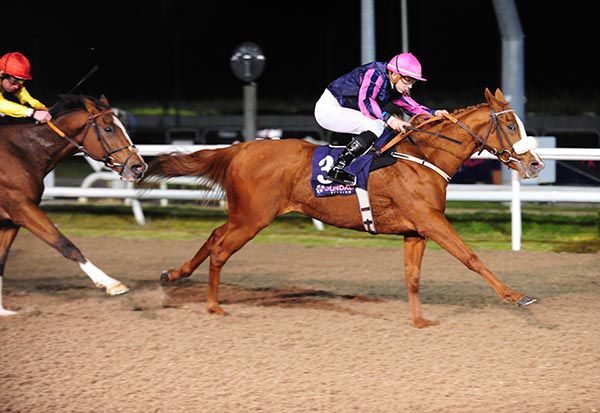 The Tracey Collins trained La Derniere Fois landed a gamble in the first divide of the Christmas Party Nights At Dundalk Stadium Handicap.

Having shown some ability in maidens, the daughter of Raven's Pass failed to make a significant on her first two starts in handicap company.

Available at 16/1 this morning, the chestnut three-year-old opened on-course at just 8s, before going off a 6/1 chance in the colours of owner Thomas Rogers.

Settled behind the leaders on the inner by Ronan Whelan, she was pushed along to challenge with under two furlongs left to race.

She was ridden and got to the front inside the final 150 yards, keeping on well from there to score by a length and a quarter.

Tribal Path (9/1), who got in as a reserve, had to settle for second under Kevin Manning for Damian English, while 33/1 outsider Clonville was a further length and a quarter back in third.

Footsteps At Dawn was sent off the 3/1 favourite and she finished a disappointing ninth.

"I'm very pleased. They went very fast, Ronan just dropped her in, and she came home well. She might get a little bit further," said Collins.

"She didn't run very well the last day, when she was mid-division, but she's been a light filly and she's after strengthening a bit with time.

"It's up to her owners, we'll see what they want to do with her, but she seems grand so I'd say we'll keep her going here."

* T.P. Madden, rider of Piper Bomb trained by Adrian McGuinness, reported to the Clerk of the Scales that his mount was reluctant to race and was slowly away.

* The Stewards interviewed J.A. Heffernan, rider of Everyhouronthehour, concerning his use of the whip in the latter stages of this race. Evidence was heard from the rider concerned. Having viewed a recording of the race and considered the evidence the Stewards found the rider in breach of Reg.10.3.(g)(frequency) and having taken his record into account and pursuant to Reg.10.6. suspended the rider for 7 race days.