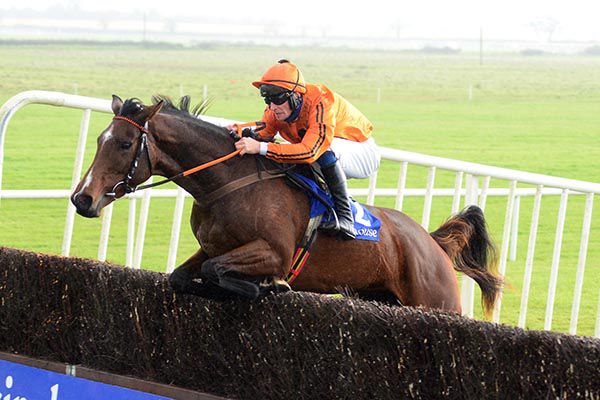 Favourite Jeremys Flame was down at the first, and the opener at Fairyhouse, the Return Of The Jumps Mares Beginners Chase, went the way of Heaven Help Us.

Dual English Greyhound Derby winning trainer Paul Hennessy is not involved in the ongoing delayed Classic at Nottingham, but on the equine front the Gowran maestro has already derived considerable pleasure from the accomplishments of Heaven Help Us.

The talented daughter of Yeats, at the second time of asking over fences, convincingly accounted for Surin by five and a half lengths.

John Turner owns the six-year-old, and of course he also had Hennessy’s 2016 Derby hero, the last to be run at Wimbeldon, Jaytee Jet.

David Mullins rode Heaven Help Us and Hennessy said on the home-bred: “I'm over the moon, absolutely thrilled. It was a very good race as the two other mares in it were black-type mares as well.

“David said she jumped great in company. Obviously the race in Sligo brought her forward.

“It's just magic. I've one horse, that's her, and where she's been bringing us is just incredible.

“We ended up in the Grade 1 last year by accident. I was looking for something to do, just entered her in it and hey presto she finished second!

“We had a great time and her run in the Supreme at Cheltenham was good. She met a lot of trouble but ran well.

“She's a wonderful mare and she's very easy to do.

“I've given most of my life to the dogs and this is a great release. I'm still busy with the dogs but not at the level we used to be as I haven't pushed it as much as we used to.

“I said to John Turner there that we'll have great sport now. We can enter her into all the big fancy races now that she's won her maiden chase.

“We got such a buzz last year and John lets me do that kind of thing. When you line up in those good races your knees are knocking and it's wonderful.

“She's just amazing and I think she can improve again.”

The Stewards interviewed J.S. McGarvey, rider of She's Made It, trained by Padraig Roche, concerning his riding close to the finish where he eased his mount, was passed within strides of the finish and forfeited sixth place to Tropical Stream.

Evidence was heard from the rider concerned who stated that he knew on jumping the final fence that he was holding sixth place from Dynamic Allen (Fr) and eased close to the finish unaware that Tropical Stream was running on well from the last fence.

Having viewed the recording and considered the evidence, the Stewards were satisfied that J.S. McGarvey was in breach of Rule 212 (A)(iv) by failing to obtain his beat possible placing as a result of easing his mount without good reason.

The Stewards suspended J.S. McGarvey for 2 racedays and ordered that he forfeit his riding fee having taken his previous record into consideration

Paul Townend is having a special boot made in case he is deemed fit enough to ride at next week’s Punchestown Festival.