Honeysuckle may bloom again at Punchestown 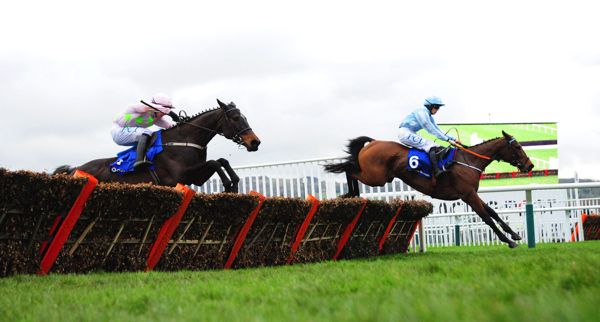 Honeysuckle may be given the chance to follow up her impressive Cheltenham Festival success and extend her unbeaten record in the Mares Champion Hurdle at Punchestown.

Trainer Henry de Bromhead has earmarked the two-and-a-half-mile Grade One contest as a potential next target for the improving six-year-old following her latest triumph.

The Kenny Alexander-owned mare made it nine wins in succession when claiming the the fourth Grade One success of her career as she got the better of Benie Des Dieux in the Close Brothers Mares’ Hurdle on Tuesday.

De Bromhead said: “It was an amazing day, and I’m delighted. She was brilliant out there to tough it out, and Rachael (Blackmore) was amazing on her.

“We will see how she is — because she has been busy enough this year, having had four runs, and we will see what everyone would like to do.

“There is obviously the mares hurdle at Punchestown, so I would say that would be under consideration for her.”

An outing in the Ryanair Novices’ Chase at Punchestown appears the favoured option for De Bromhead’s Arkle winner Put The Kettle On — rather than a trip to Aintree.

The County Waterford trainer added: “She was brilliant, and again I was delighted with her — she is very much an improving mare.

“They drew well clear of the rest, herself and Fakir (D’oudairies). It was a brilliant.

“She would be looking at Punchestown, or maybe Aintree, but I’d probably say it will more likely be Punchestown.”

Although Put The Kettle On had shown plenty of potential with victory at Cheltenham in an Arkle trial on her previous start, De Bromhead confirms her latest success surpassed his expectations.

He said: “I have to say it did take me by surprise, because we had Notebook in there — and he had been having such a good season.

“I hoped she would run into a place — but to see her bound up the straight in front was amazing.”

De Bromhead has not ruled out the possibility of a rematch between Put The Kettle On and stablemate Notebook, who saw his unbeaten run over fences come to an end when trailing home sixth in the Arkle.

He said: “I’d say we will still aim towards Punchestown with Notebook — I haven’t discussed it with anyone yet, but I’d imagine that is what we will do to try get him back.

“He just ran a bit flat, and maybe the ground was against him a bit. The false start probably didn’t help him either- but we don’t want to make too many excuses.

“I just think it wasn’t his day, because he certainly didn’t run to form when you see Fakir up there.”