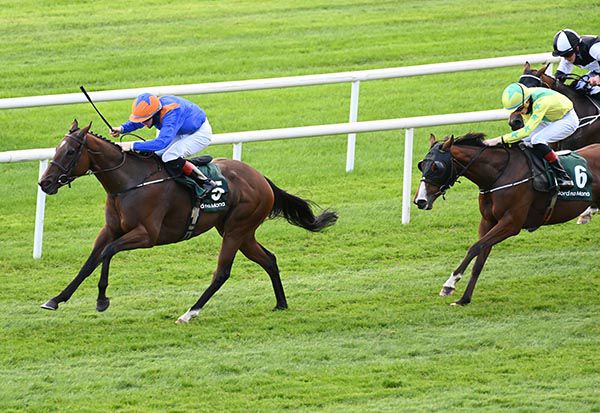 Miss Florentine obliged under Robert Whearty in the apprentice handicap at the Curragh after being sent on in the final quarter of a mile.

The favourite was backed down to 4/1 for this mile race and made sustained progress on the inner after halfway.

She was pushed along to get the better of Eloy D'Amerval at the two pole and Whearty soon got into the drive position as the pair forged on.

The four-year-old filly kept finding and held off the closers. Runner-up Stellar Spirit was half a length in arrears at 14/1. He was a head in front of Supreme Machine (20/1). Prince Of Peace's price contracted to 6/1 from 25/1 in the morning and he got a fourth-placed dividend.

“She’s such a tough cookie and has kept improving all the way through the season," trainer Ross O'Sullivan said.

“She quickened up well and then got a bit lonely in front but held on well in the end.

“That’s probably her out of the low grade handicap bracket now. It gets a bit harder from here on in but it’s great to win the races she has as she’s a homebred and John (Harney) has the mare at home.

“She came out of the race in Punchestown so fresh and well that we said we’d have another go. She didn’t leave a nut the night she came home from Punchestown. She’s a real tough filly and has a great constitution. She loves her racing.”

Miss Florentine has won two in a row and three of her last six races.