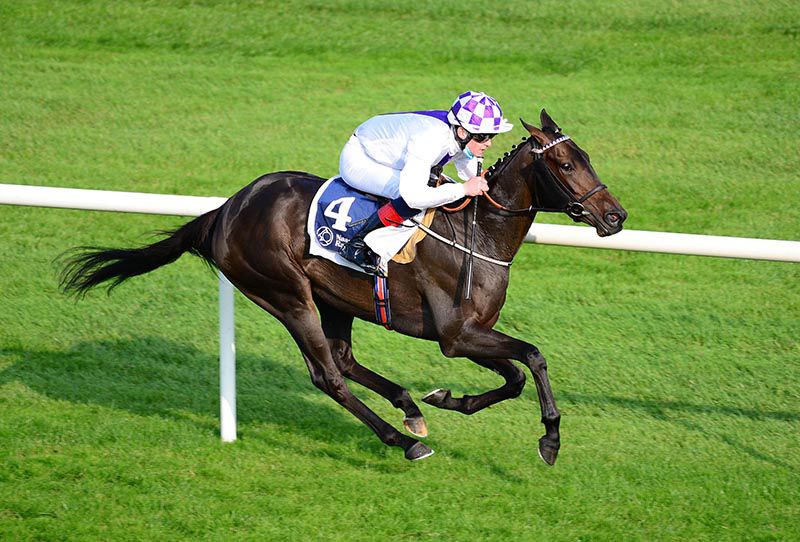 September has been excellent for Luke McAteer. The Donegal man today followed up a Tipperary brace from Tuesday to win the Naas Nursery Handicap on Verbal Fencing (7/2 favourite).

Up in trip and on different ground she may have been, but Jim Bolger’s Verbal Fencing had no problem supplementing her Down Royal gains from nearly a fortnight back. She was always in a decent pitch.

McAteer was aboard then too, and here Equilove and Virtual Hug chased home at distances of three and three parts of a length and a length and a quarter.

Bolger travelling head man Ger Flynn said:- “She was stepping up to a mile there and seemed to stay really well, she hit the line travelling really well.

“Luke said he was always confident, sitting third or fourth. We were a bit concerned about the ground but she handled it well.

“It was easy in Down Royal but that was good today, beautiful ground. She did it well and we'll look for another nursery.

“Luke seems to get on well with her. He's having a good run and is in a real purple patch.”

At the request of the Stewards, A.J. Farragher, rider of Bell Ex One, trained by R.P.Cody, reported to the Stewards' Secretaries that his mount jinked to the left having gone about 100 yards out of the starting stalls.

Having reviewed the recording and considered the matter, the Stewards decided that no further action was warranted.