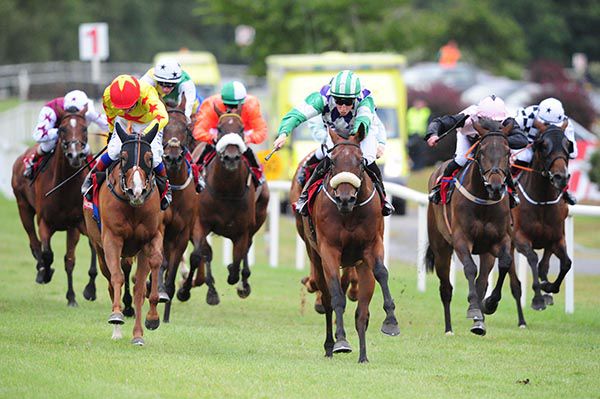 The Eoin Doyle trained Ingleby Mackenzie completed a hat-trick of wins in the Bet In-Play With The Ladbrokes App Handicap.

Previously trained in the UK by Mick Channon, the son of Sixties Icon made the breakthrough on his sixth start for Doyle, scoring over flights at Tramore.

He followed-up at Gowran last month, and back on the level for the first time since September, he was sent off the 3/1 favourite.

Settled in mid-division by Ross Coakley, the bay victor was eighth as they entered the straight.

He was soon angled to the outer for room, and was poised to challenge behind the leaders with under two furlongs to race.

He was ridden and swept through to lead from the furlong pole, keeping on well from there to hold off the effort of Touch Of Gold by a length and a quarter.

The runner-up was returned at 7/1 under Chris Hayes for Michael Kennedy, while first reserve Galtymore (11/2) was another two and three parts of a length back in third.

Coakley said afterwards: "He has improved over hurdles. He is only a four-year-old, there’s a nice bit of size to him, and he has strengthened up a bit off last year too and hopefully he’s a progressive type horse.

"It was a rough race and I ended up getting shuffled back a little further than I initially planned. We went a good even gallop but it got quite rough into the first bend, but I loved the way he travelled into it, and he’s game and genuine.

"To me there it felt like a mile and a half would be his minimum. I wouldn’t have been stepping him back in trip. He’s 64 (rated) and he’s going to have to step up in grade now in the handicap. He’s going to be out of those low-grade handicaps but I’d be hopeful he can keep progressing."

On his own current run of form, Coakley added: "It's been going great. It’s like everything - it's just trying to get on the right horse. Most of the lads in that weighroom are perfectly capable of winning on these type of horses, the hard part is getting on them.

"But at this difficult time, I'd like to dedicate it to Laura Barry. I done many a year pony racing with her, and over the last couple of years we lost touch but she was a great girl and we’re thinking of her family at this time."