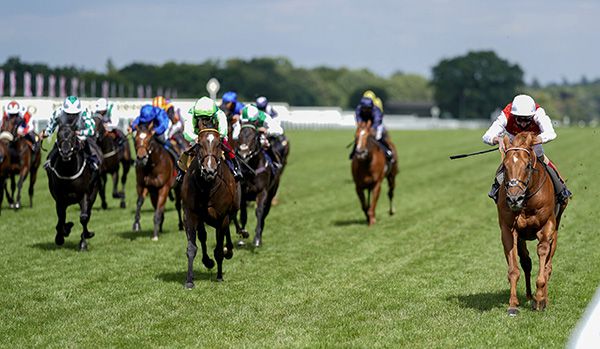 Trained by Clive Cox, the three-year-old followed up his Royal Ascot success with placed efforts in the July Cup and Haydock Sprint Cup — as well as being beaten little over a length in the Prix Maurice de Gheest.

He was also a Group Two-winning juvenile in the Richmond Stakes, and finished second in the Middle Park at Newmarket.

“He suffered a tendon issue that proved to be longer term than first realised, so rather than miss a complete season it was with reluctance that it was decided to retire him to stud,” said Cox, in a statement to the PA news agency.

“He was the best horse owned so far by HH Sheikh Sultan Al Deen bin Mohammed bin Salman Al Khalifa, who has been deeply involved with all decisions regarding what is best for the horse.

“We had hoped to finish this season on a high in the Champions Sprint at Ascot last Saturday, but it wasn’t possible.”

Cox had high hopes with him for next year too, until injury intervened.

He added: “It was a premature close to his racing career, and everyone was looking forward to his four-year-old season.

“I’ve been fortunate enough to train some top-class sprinters, most recently Harry Angel, but Golden Horde had all the physical attributes to maintain his progress — plus a wonderful temperament.

“He danced every dance, no matter what the course or ground, and was a model of consistency at the highest level.

“We will all miss having him around, and I hope he will be of interest for the next chapter in his life but greatly look forward to handling his progeny.”

A decision on where he will stand at stud has still to be made.