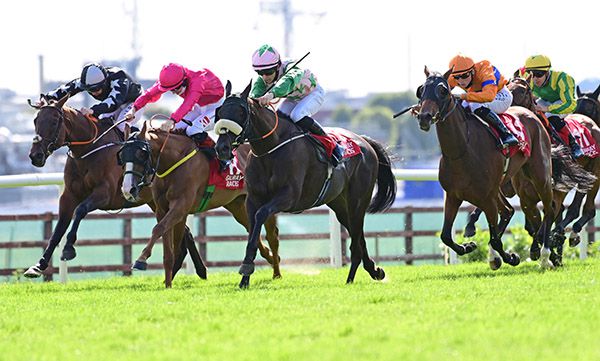 Insane Bolt (11s into 8/1 on the show) hit the front in the final furlong to win the first division of the Fr. Breen Memorial Handicap.

The Slade Power gelding had finished fourth over hurdles behind Clonbury Bridge on Thursday, and here he went away under 5lb claimer Mikey Sheehy to beat 9/2 joint favourite Lunar Power by a length and three quarters. Moon Daisy (13/2) finished another head away in third.

Formerly a winner on the Flat for Johnny Murtagh and over hurdles for Gordon Elliott, the 5-year-old is now in the care of winning trainer Peter Fahey, who commented: “We're delighted. In fairness to Tom Keane he picked the horse out of a claimer (over hurdles at Limerick in May) and there are a good few people involved so it's brilliant.

“He's a nice horse and he ran a good race here during the week. He'll tip away in those handicaps, he likes the good ground.

“We'll mix it over hurdles as well. He was bought for a bit of fun for a crew of people and it's worked out well. There are some lads from America involved in shares as well.”