It'sallabouteve and McCurtin in Limerick 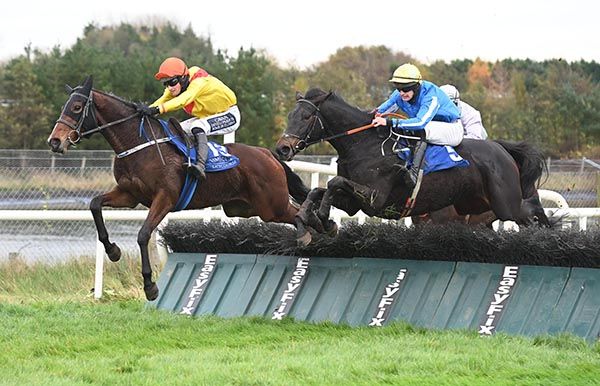 It'sallabouteve, near side, about to pass Churchtown Ruby on the run-in
© Photo Healy Racing

It'sallabouteve took the two-mile Adare Manor Opportunity Maiden Hurdle in Limerick under a hands and heels ride from Ambrose McCurtin.

The five-year-old mare began to improve from mid-division after four out. She was soon on the heels of the leaders travelling around the home bend.

The 16/1 chance made sustained headway between horses coming to the second last and was third on the run to the final obstacle.

She closed right up on Churchtown Ruby in jumping it and was nudged along to pass her on the run-in.

She won cosily by three parts of a length from the 50/1 shot who showed plenty on her second start (and first over hurdles).

It'sallabouteve is now two from two in Limerick having won a mares' bumper on St Stephen's Day last year.

Trainer John Joe Walsh said: "She is back to where she collected here last Christmas and has developed into a grand mare now. Starting off today I thought the ground was a bit good for her because she won here on pure bog last year.

"We might go for a winners' race now but we'll have to think about it. She is very promising and everything comes naturally to her."