Jason The Militant battles to victory in Limerick 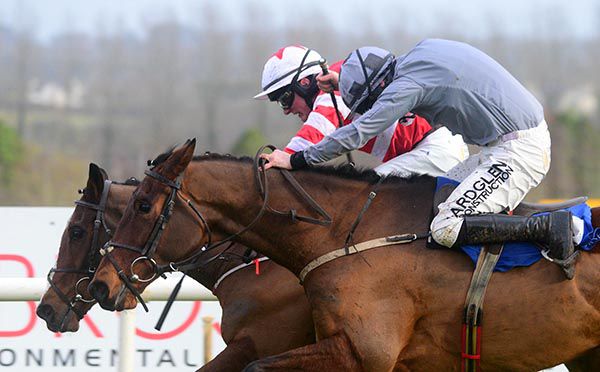 Jason The Militant, far side, gets the better of General Counsel
© Photo Healy Racing

Hugh Morgan's mount picked up the lead approaching five out, but was strongly pressed by both You Can Call Me Al and General Counsel, as the race hotted up with two flights to negotiate.

Jason The Militant got away best from that hurdle as General Counsel was less than fluent and You Can Call Me Al was tapped for toe.

General Counsel surged alongside, however, at the last and got his head fractionally in front on the run-in.

Jason The Militant wasn't to be denied, though as he rallied on the inside close home to prevail by a neck at 4/1.

Runner-up General Counsel was backed down to the same price from 7/1. The front two were seven lengths ahead of 6/4 favourite You Can Call Me Al.

Hugh Morgan said: “He battled away the whole way, he jumped well and didn’t miss a hurdle. He was long at the last and came for me when I wanted him.

“When Brian’s horse (Hayes on General Counsel) came to him he picked up again and got back up. He was brave to battle away.”