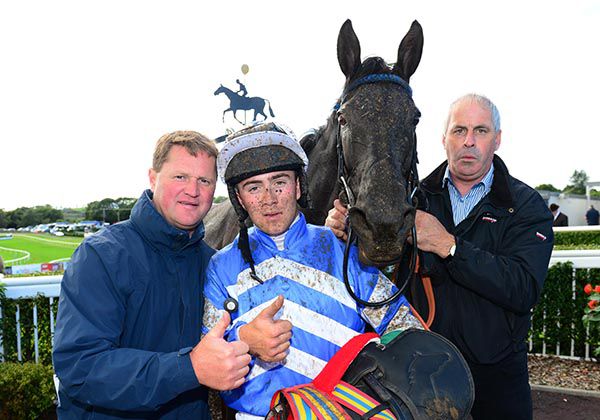 Gainford held the daughter of Trans Island in mid-division for much of the race and the pair made progress to be a closer fifth jumping the second last flight. Five horses were in contention early on the run-in and while Cushinstown Finest was checked inside the final furlong, she finished strongly to edge ahead close home and score a neck win over My Galway Girl.

Third-past the post Electricitywork, which hampered the winner, veered left in the closing stages and was later denoted to fourth place with Drumconnor Girl taking that final placing, having been hampered close home. Drumconnor Girl, whose amateur jockey Cormac Abernethy was chasing a first winner, ran a promising race to eventually collect third place under a mostly hands and heels ride in the home straight.

Winning jockey Gainford hails from Kiltealy, Co Wexford, and had previously ridden three point-to-point winners. Following the race winning trainer Colin Bowe said "to be fair to her she has been running consistent enough.

"We just said we would claim the seven (pounds) off her, Jordan has a bit of experience with the point-to-points.

"He rides out for us and he works for us, so he deserves his chance. He's local to us and is based with me - he works for me seven days a week. He has done loads of schooling at home.

"He will probably stay point-to-pointing for the year and then maybe change over (to conditional) because he is very light.

"He kind of got caught down at the bottom (of the hill) but it worked out grand and she stayed going up the hill.

"We'll maybe come back here with her for the next meeting (in October) and then we'll give her a break."

Charlie Appleby has confirmed the Prix du Moulin as the next objective for his star colt Pinatubo.

Paul Hanagan is well on the road to recovery after breaking his back in a fall at Newcastle in February.

Following 10mm of rain overnight at Tramore the going is now good, yielding in places, ahead of the 4-day August festival which begins this afternoon at 4.40.