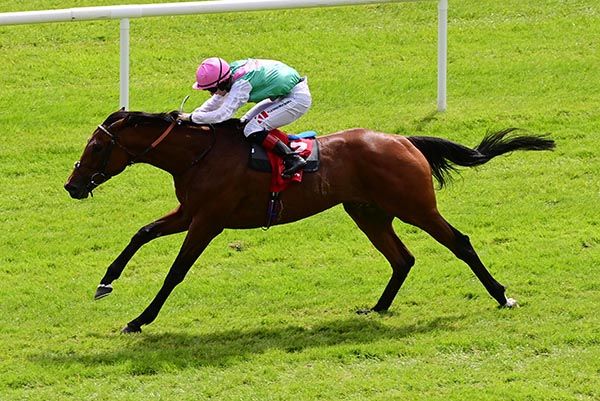 Colin Keane savoured his first Irish Derby aboard Westover in the Curragh, but was quick to give credit to the colt's regular jockey Rob Hornby.

Keane replaced Hornby for this race due to his experience of having ridden Classic winners at the Curragh.

Westover went off 11/8 joint favourite with the supplemented Epsom Oaks winner Tuesday who was bidding to become the first filly to win this Classic since 1994. French Claim soon worked his way to the head of affairs with Westover, tracking him in second.

The front pair enjoyed a three length lead over third-running Piz Badile with three furlongs to go. At this stage, Tuesday was back in sixth of the eight runners.

Westover travelled well to head French Claim turning for home and was ridden by Keane with two furlongs left.

The Frankel colt edged to his left but asserted and moved clear by the furlong pole. He kept up the gallop to put the field to the sword by seven lengths in front of an attendance of 11,300.

Piz Badile (18/1) came in second, a couple of lengths in front of French Claim (16/1). Tuesday was a never nearer fourth.

Colin Keane said: "I suppose every jockey says the race they would like to win is the Epsom Derby, the second one would be the Irish Derby I think. It is great to win our home Derby. It's unbelievable.

"Full dues to Rob Hornby, I rang him this morning and he told me everything I needed to know about the horse - a true gentleman. He said the horse gets the trip well and he'll get further, so don't be afraid to use him up. He said one thing he will do is he will get to the line. Ralph (Beckett, trainer) said the same and, when you turn in, get him rolling and you'll stay going.

"I was (a bit keen for a furlong) but once he got in behind one he gave me a beautiful ride. He's a monster of a horse, so he is only going to be a better horse next year.

"I'm very grateful and thankful to the owners, the Juddmonte family, they have been very good and loyal to us since they joined Glenburnie (Ger Lyons' stable). I'm very thankful that they put their faith in me to ride this horse today."

Trainer Beckett said: “Colin was positive on him from the outset and took the bull by the horns. Rob Hornby spoke to him at lunchtime today and encouraged him to ride him that way.

“It’s important that you go out with your boots on in these occasions and Colin certainly did that today. I really didn’t think he would win like that at this stage. He’s a big horse and still a work in progress. He’s going to get better with age.

“I never felt he was going to stop when he got into his stride. He drifted out a bit into the middle of the track and is still as I say a work in progress. I hope there is more to come with him.

"He has a great temperament and that shone through today.

“This was always a race that would fit in well. The track suits him and it’s wonderful to get it done. It’s a big day for us.

“He’s going to develop from three to four never mind through the rest of the year you would think.

“We’ll discuss it with the family and everybody to see what we do next. It depends how he comes out of today. He’s in the King George and that would certainly be an option.

Westover suffered a less than clear route when a running-on third in the Epsom Derby on his last start.

Aidan O'Brien said of Tuesday: “I wouldn’t take anything away from the first three horses but anything that sat handy stayed handy. It was probably hard with the wind to get into it.

“The winner is a very good horse, no doubt.

“There is probably more to come (from Tuesday) and hopefully she will run better the next day.”