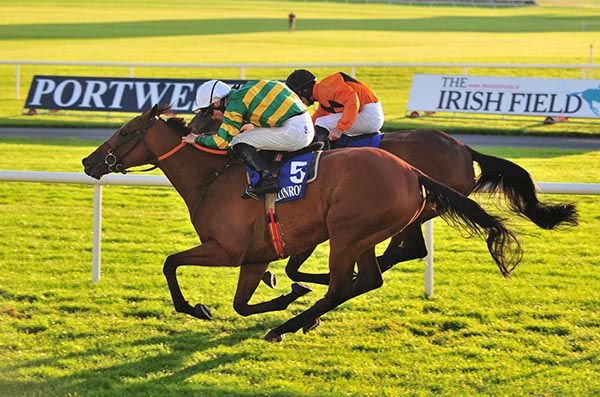 The defection of Peregrine Run (change in going) opened up the Brendan McNulty Memorial Maiden and it was Rock De Baune that made the most of the opportunity, but only just in the Ballinrobe finale.

This fellow beat subsequent star novice, Klassical Dream, in a juvenile hurdle at Auteuil in 2017 before joining J P McManus and John Kiely.

Here with Tom Madden up for his Flat debut 11/4 joint favouite Rock De Baune was slowly into his stride and raced towards the rear.

He made progress into fifth two and a half furlongs out, and was ridden two furlongs out.

The son of Saddex stayed on into second a furlong out, and he pressed the leader inside the final furlong, disputing close home and leading at the line for a nose verdict over Tritonix.

"We couldn't get a race for him the whole year as the ground was too hard for him and I just wouldn't want to run him on that," said Kiely.

"He is a nice horse and he stays. Today was his not his trip and it's not his track either, it's too sharp for him. It's nice that he got a win here.

"Hopefully everything will stay right with him and he will be a grand horse in time."