Kush makes all at 80/1 under Mark Gallagher 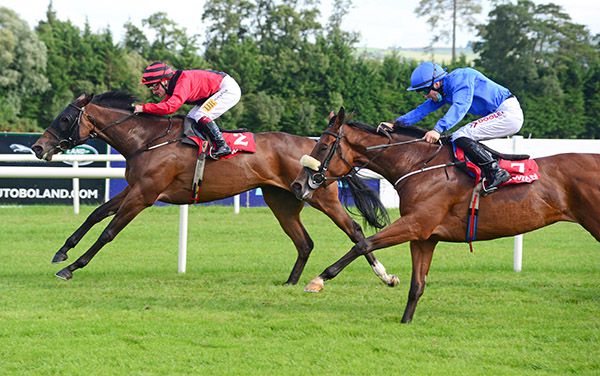 The Irish EBF Supporting Irish Champions Weekend Fillies Maiden produced a shock as 80/1 chance Kush made all to win in the hands of Mark Gallagher.

The 4-year-old, getting off the mark on her third start, had finished sixth in a maiden over seven furlongs at this venue last month and saw out the longer trip well to hold Goodnight Kiss (14/1) by half a length, with 3/1 joint favourite New Moon Rising another length back in third.

Winning trainer Ross O'Sullivan said: "To say she hasn't been easy is an understatement and we went to Dundalk twice last winter and she didn't load. She actually has no problem with the stalls and would stand in them all day long, but she won't go in.

"We got Johnny Wixted, the stalls handler, and a few of the lads over on the Curragh and they were brilliant and they lifted her in on her last three runs. Only for them she wouldn't be racing."

"She always worked well, that's why we kept persevering, and has an engine and can gallop.

"She came to us unraced from Charlie Appleby's at the sales last year (for 75,000 GB pounds), is by Shamardal and is out of a Tracey Collins-trained mare who won two Group 3s. To win a maiden with her is great and her American owners have been very patient.

"You'd say it's not worth it but to get this far is brilliant and I'm delighted for myself!"