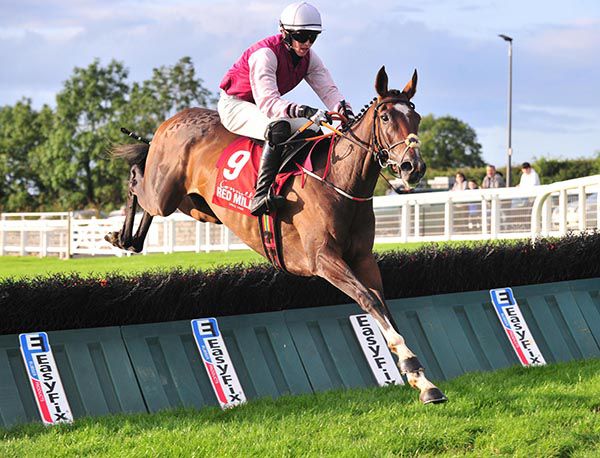 Successful in a point-to-point at Corbeagh House in December, the daughter of Yeats since ran well in two starts at Tramore and was last seen finishing fifth of eighth behind Bye Bye O Bye at Kilbeggan.

Available at 12/1 this morning, the bay six-year-old opened on-course at just 7s before going off a 9/2 chance.

Soon in a clear lead, she had all her rivals in trouble from the second last and kept on well from the final flight, going on to score easily by twenty-three lengths.

Woodbrook Boy (8/1) finished second under Rachael Blackmore for John 'Shark' Hanlon, while Hesamanofhisword (16s this morning and returned 5s) was another length and a half back in third.

Big Tree who was backed from 5/2 into 7/4 favouritism on-course could only manage fourth, while the friendless Good Luck Hope (15/8 out to 3s) was a disappointing eighth.

"She has to be trained from the field and she's one that's given us all sorts of problems," said Ryan.

"We were going to give up on her but she has a brilliant pedigree and we said we'd point-to-point her.

"She could have won all three days in the points but she eventually got there one day at Longford in a bog.

"She had a run in Kilbeggan to put her spot-on for this."

Le Hachette had the second lowest auction price of the nine runners at 3,800 Euros.

* The Irish Horseracing Regulatory Board Veterinary Officer examined Good Luck Hope, trained by J.A. Nash, at the request of the Stewards and reported the animal to be post race normal. Samples were taken for analysis.

* D.J. Mullins, rider of Big Tree trained by Thomas Mullins, reported to the Clerk of Scales that his mount's saddle slipped.

* R.M. Power, rider of Good Luck Hope trained by J.A. Nash, reported to the Clerk of Scales that his mount hung right all the way.