Lunar switches on Power in Punchestown 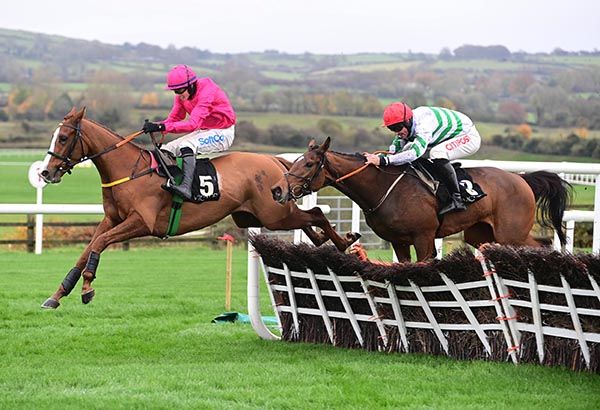 Lunar Power brought up plenty of bets when making virtually all in the 3yo hurdle over an extended two miles on Punchestown's card.

The Power gelding had been unplaced in his first try over flights at Down Royal in August but, since then, came in runner-up on the flat at Fairyhouse before bolting up by six lengths in a mile and a half handicap at Leopardstown in October.

In his last jumping assignment, he raced towards the rear but it was a different story today as Bryan Cooper sent him on. He was pressed throughout by Bynx who was backed at fancy prices this morning.

Cooper went for home after the second last as 11/10 favourite Iberique Du Seuil moved into pursuit in second. The 'jolly' reduced the gap at the final flight but Lunar Power had plenty in reserve and stretched clear on the run-in to score by four and three quarter lengths at 6/4 from 7/2 in morning trading.

Swinging London was a market drifter to 7/1 and came in 14 lengths behind the runner-up Iberique Du Seuil.

Noel Meade said: “That was more like it. I don't know what happened him in the north (Down Royal), he got a fright at the first and then his jumping just got worse and worse.

“In fairness to the horse he probably wasn't at his best either. Between the north and Leopardstown the last day he was a different horse, he bolted in last time.

“Maybe it was being in front but my horses weren't right for a lot of the time during the summer but he was running well even when they weren't right.

“He jumps well and there is no reason he can't compete with them in the better juvenile races.

“He has an engine and he stays well, for three-year-old hurdling that's what you want.”

Adayar taken out of King George

Reigning champion Adayar will miss the defence of his King George VI And Queen Elizabeth Qipco Stakes crown having been taken out at the latest scratching stage.