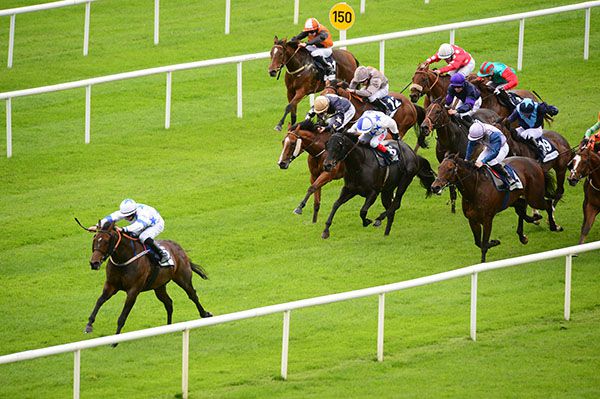 Make A Challenge continued his march up the ranks by turning what appeared a competitive Manguard Plus Joe McGrath Handicap into a procession at the Curragh.

The Denis Hogan-trained gelding started his winning run off a mark of just 68 in Fairyhouse at the end of May and made it five wins in the space of four months with an amazing six lengths triumph here.

Joe Doyle oozed confidence on the son of Invincible Spirit who was prominent throughout and cruised clear from over a furlong out to readily justify 5/1 favouritism.

Ardhoomey took the runner-up spot, with Only Spoofing a nose away in third, and Aspen Belle completed the places in fourth.

Hogan said, “He’s improving all season and is showing more and more gears all the time.

“A lot of people were questioning why we were going back to five and not claiming. I thought we would claim at York in two weeks’ time in the 100 grand handicap over six and that will be him done for the season then.

“Today was his first day at five and I wasn’t shocked (with the performance) to be honest. He did well to get up the hill in Galway over seven! I’d be hoping he’ll be a Listed horse next year.

“All my staff deserve the credit. He was tricky in stalls early in the season and they all had great patience. Jamie Joyce did a lot of work with him and Joe Doyle is as good as any professional and will ride a lot of mine going forward. He’s a super worker and great with all the younger staff. He’s a great help to me.”