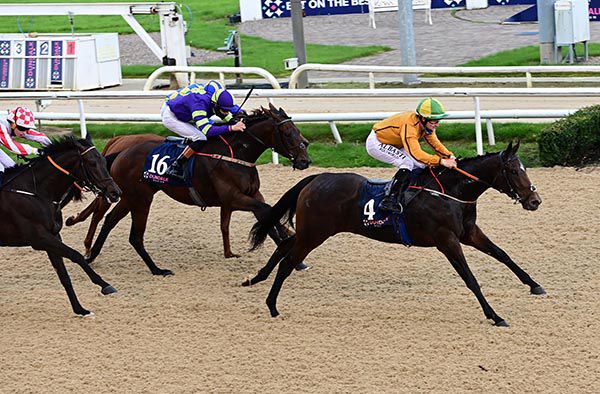 After winning a course and distance claimer for Eddie Lynam on her previous outing, Sister Lola (8/1) made a winning start for new connections in the Crowne Plaza Hotel Dundalk Handicap.

Th daughter of Slade Power was held up in rear of mid-division by Shane Foley before getting an unimpeded run down the straight to hit the front inside the final furlong. She kept on well to beat Tai Sing Yeh and her former stablemate Phantom Power by one and a half lengths and a neck.

It was a quick double for in-form Foley after his win on Exquisite Acclaim in the previous contest.

The winner had been acquired for a claiming price of E8,000 and this was her fourth career win, all of which have been achieved over seven furlongs.

Winning trainer James McAuley said: “It was brilliant. There was no rocket science in claiming her, I think there were ten claims in for her last week.

“It didn't take a genius to figure she was cheap, I didn't think she'd repay us that quickly but it's great.

“She doesn't take a whole pile of work at home as she can be a fraction hot. The only credit we can take is that we claimed her, Eddie had her ready.

“She enjoys it up here. She'll have an easy time at home and we'll keep tipping away up here.”