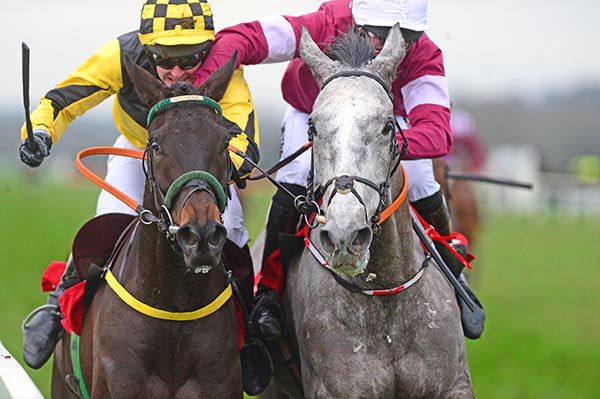 Noel Meade won race three at Cork for Gigginstown House Stud with Eurobot, but the Tu Va handler relegated the leading owner to the runner-up spot when bringing up a double at the Mallow venue in the Follow Us On Facebook INH Flat Race through the Mark O'Hare partnered Behind The Curtain (100/30 into 11/4 favourite).

In Gigginstown's maroon and white Barry O'Neill was looking good for much of the straight on Henry de Bromhead's Falco De Candale Aa.

However Behind The Curtain poked up his inner late on to gain the day by a neck, with a length to Lady McCabe in third.

Gigginstown also had the fourth past the post, Ennemi Public, a length and three parts back.

"It is great to win for local people (the Crooked Crew Syndicate). I said if this fella doesn't win, I might never get out of Cork - it might be worse now!" surmised Meade.

He added: "We loved this lad all last year and we thought he had a big chance in the Land Rover Bumper but he went lame a couple of days before it and never got a chance to run. We have just been struggling to get him right all year and even now he is only barely there.

"I think he is a nice horse but he is light and weak."

Meade went on: "Mark (O'Hare) said he was hanging in and away from the other horses but once he got to the rails he was a lovely ride and was grand. He said he was lucky the gap came.

"I didn't really think any further than today but he is a weak horse and maybe we might just give him one more run in a winners' bumper. It might be no harm to wait to go jumping until next year but we'll see how he comes out of today."

Miss S. Lynam, rider of The Dude Abides, trained by Ms Margaret Mullins, reported to the Stewards' Secretaries that her mount gurgled.