Mick and Molly Syndicate really in clover with Aprils Joy 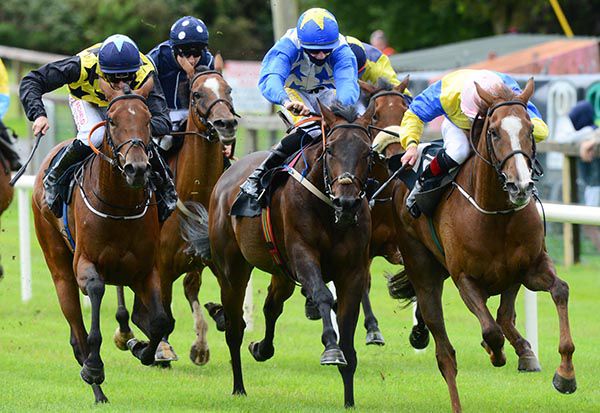 Aprils Joy supplemented a mares maiden hurdle success from Kilbeggan on Monday evening with victory in division one of the Bellewstown Handicap this afternoon.

Declan McDonogh tried to slip the field on 66/1 chance Aunty Audrey from the three pole, and those tactics on the front-runner nearly paid off.

Conor Maxwell meanwhile, aboard the Denis Reddan-bred well-related sort, had to bide his time before getting a run on the winner.

To the delight of those that supported her from 11/4, and bigger earlier, into a returned 9/4 favourite, Gavin Cromwell’s victorious five-year-old got there near the line to prevail by a neck.

“It's brilliant for the owners (Mick & Molly Syndicate) as they only bought her last week and she's after winning twice,” said Cromwell.

“I might give her a chance now and we might go to Galway with her. She will have a good few choices there.

“I don't know exactly what she is going to go for but we'll target Galway.”

At the request of the Stewards, J.A. Heffernan, rider of Morph, trained by Mrs. Jessica Magnier, reported to the Stewards' Secretaries that his mount took a bad step and began to hang badly.

The Bet 10 Get 20 With MansionBet Handicap (Div I) was won by Jungle Jungle (16/1) who got up close home to deny Han Solo (9/2) by half a length after that one had travelled well to lead over a furlong out.

Oh So True off the mark at fifth attempt

Oh So True (11/2) got a nice run through on the far rail to win the Irish EBF Supporting Champions Weekend Fillies’ Maiden (Div II) under Wayne Lordan.

Laggata a third of the day for red-hot Murtagh

Laburnum blooms in the Hurry Harriet

The Irish Stallion Farms EBF Hurry Harriet Stakes (Listed) was dominated, as expected, by Aidan O’Brien and Laburnum (4/5 fav) took over early in the straight from front-running stablemate Ennistymon (3/1) before defeating that one by a length and a quarter.