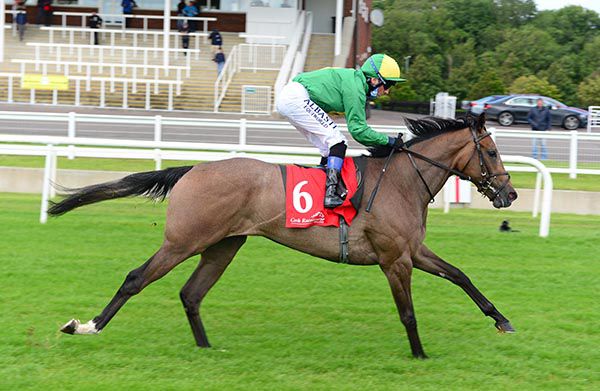 The Sir Prancealot filly, having her sixth race, made her experience count to keep the challenge of Sacred comfortably at bay in the final furlong.

The 15-2 shot took up the running from big outsider Wings Of A Dove two furlongs out — and although Sacred appeared briefly set to justify her starting price of 15-8, Miss Amulet responded gamely for James Doyle to prevail by a length.

The Naas Listed winner therefore proved well up to this Group Two standard — while Umm Kulthum stayed on from off the pace to fill third place, three and a quarter lengths further back.

Condon said: “It was a game display, and just listening to James on TV he said she was a bit isolated and the speed was away from her.

“I love her attitude and she’s clearly still improving — I don’t know where she’ll stop.

“She took all the travelling well, which is a bonus, and she’s really progressive.”

He added: “We’ll be looking at the Cheveley Park now, why not — let’s see where she ends up, when these fillies are improving you never know.

“I’ve had runners in this race before so it’s great to win it, it carries huge prestige.

“We have a lovely team of two-year-olds this season and the wonderful part of it all is none of them cost a great deal. This filly cost less than £8,000, so it’s a great story.”

Doyle was riding Miss Amulet for the first time, having been on board Sacred both for her Newmarket maiden win and close second in the Queen Mary Stakes at Royal Ascot.

It was a switch which paid off, but Doyle admitted to some moments of worry when he realised the favourite was challenging.

“I was obviously concerned,” he said.

“I know she’s got plenty of ability, that filly, and I was slightly worried — especially with my filly going up in trip.

“She had experience, and that definitely counted today — she knuckled down well late on.”

Condon is no stranger to success at York, with former stable stalwart Success Days, and Doyle added: “He’s a great trainer and he has some lovely horses. It’s nice to ride him a winner.”

Sacred’s trainer William Haggas indicated a combination of the move up to six furlongs and rain-softened surface might just have counted against his runner-up.

He said: “She ran a good race, but didn’t quite last out — which I thought she would.

“I’m sure Exceed And Excel’s (offpsring) prefer top of the ground, but I don’t want to take anything away from the winner. I thought she ran a solid race.

“My first reaction is to go back to five furlongs for the Flying Childers at Doncaster and take it from there — that is the next Group Two over five furlongs.”