More joy in 2014 for Donnelly and Phillips 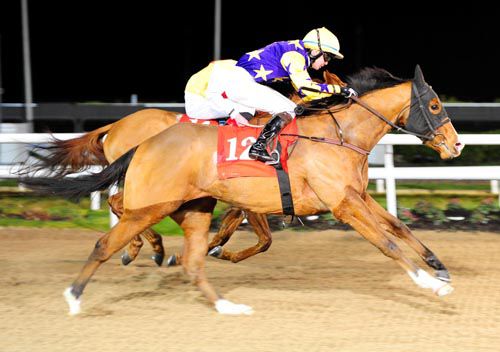 After the success of Catwilldo here last week, trainer Garvan Donnelly and rider Gary Phillips kept up the good work in 2014 when Lily's Prince landed the Jolly January Dining Handicap at Dundalk.

The Strategic Prince four-year-old was shedding his maiden tag here at the seventh time of asking and he was brought with his challenge down the outer. Patiently ridden, the 10/1 shot got up to beat the always prominent Runaiocht by half a length.

Donnelly disclosed: "The last day he was slightly unlucky. He acted up in the stalls a bit.

"Ideally he probably wants a bit further but he looks a well handicapped horse on this and his last run and we'll keep going with him.

"His wife passed away last year. She actually led in Samollie the last time he won. This horse was named after her."

R.P. Cleary, rider of Elusive Spring, trained by Jarlath P.Fahey, reported to the Stewards' Secretaries that his mount made a respiratory noise in running and was eased.

Hello out to follow-up on Royal Ascot success

Kevin Ryan has been thrilled with Hello Youmzain as he aims to add the Darley July Cup to his Royal Ascot success.

Charlie Appleby believes Master Of The Seas can handle the step up from maiden company to Group Two level in the bet365 Superlative Stakes at Newmarket.