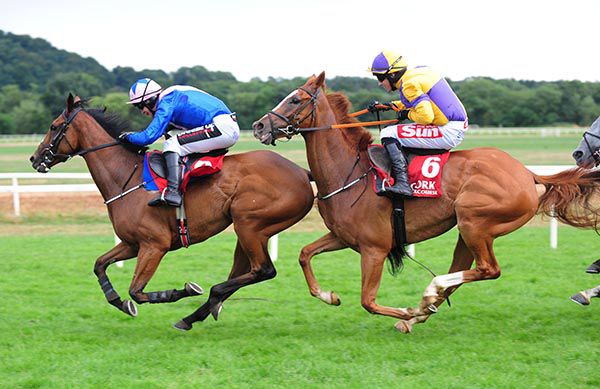 After winning the second with Howth Summit, Joseph O'Brien and JJ Slevin doubled-up with Glocca Mora in the Mallowprint.com Maiden Hurdle.

Third when favourite on his last start at Kilbeggan, the son of Fame And Glory was stepped up in trip to three miles for the first time today.

With Cooldine Bog and Caliption racing clear of the field, the bay victor was settled well off the pace in mid-division.

He closed on the front pair from four out, and was ridden to challenge on the inner from the second last.

He got to the front before the final flight but was soon pressed by Shetland Bus, with just a neck separating them at the line.

Bryan Cooper was aboard the runner-up (11s to 7s on-course) who was slightly impeded by the winner at the last. The 6/4 favourite Caliption was another three and a half lengths back in third.

Slevin, who was earlier on the mark with Howth Summit, said afterwards: "The step up to three miles suited him and he jumped better in the latter part of the race. He stuck at it well but was a bit green in front. He is a grand staying horse and is good and hardy for a four year old."