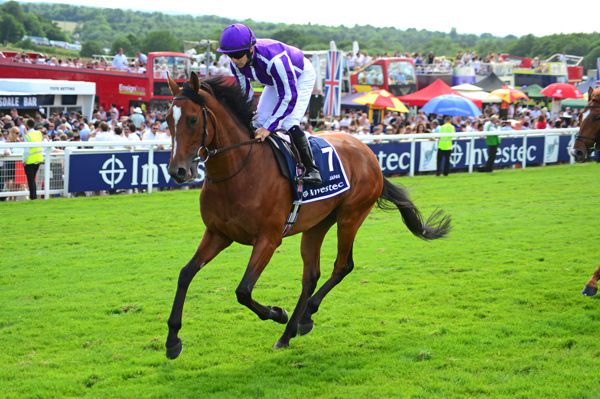 O’Brien mounted a dual assault on the 12-furlong Grade One, but they proved no match for the Yoshito Yahagi-trained winner, who was a two-length victor in the hands of Yuichi Fukunaga.

Contrail was smartly away before being settled in mid-field as Kiseki made an eyecatching move down the back straight, tracking round the field to grab the lead and build up a six-length advantage at one stage.

Fukunaga bided his time though and as Kiseki was reeled back in, Contrail started to get rolling and while he still had some distance to make up two furlongs out, he engaged an extra gear to take it up inside the distance.

The son of Deep Impact stretched clear of Authority, with Shahryar back in third, rounding off a memorable few weeks for Yahagi, who also saddled the first Japanese-trained Breeders’ Cup winners in Loves Only You and Marche Lorraine, victors in the Filly & Mare Turf and Distaff respectively at Del Mar.

Contrail has been a star for Yahagi and now retires to Shadai Stallion Station as the winner of five Grade One races.

Yahagi said: “All I have now is mixed feelings of relief and lonesomeness. In the colt’s latest start (Tenno Sho (Autumn)), he broke poorly so I told him, while he was walking in the paddock earlier, to stay calm at the start.

“It worried me a bit since the pace was slow and he wasn’t in that good a position, but we had tuned him up to perfection and the colt gave us all he had in the straight.

“I have to admit I was under a lot of pressure during the two years he was at my stable, but I think it has helped me in becoming more mature, and I can’t thank him enough. Wouldn’t it be wonderful to win the Arc with an offspring of his someday?”

Fukunaga added: “The colt had issues before his debut, so there were always concerns about his form, but I am so proud of how he proved himself today — I’m overwhelmed.

“All I did today was believe in him. He broke well and everything went just perfectly.

“He has given me every jockey’s dream and I am utterly grateful. The colt shone a bright light over a gloomy year due to the pandemic last season. I’m relieved that we can send him off to his next career with this victory.”

Japan was partnered by Yutaka Take and after a fair break, he settled on the inside but when asked for an effort in the straight, he could not mount a challenge and finished six lengths behind the winner in eighth.

O’Brien was represented by Pat Keating, who said: “The track may have been a bit too fast for this horse. He was able to secure a good spot but wasn’t able to keep up with the pace.”

Broome was slow to start under Ryan Moore and could not raise his effort two furlongs out, eventually finishing eight and a half lengths back in 11th.

Keating added: “He missed his break and that cost him.”

Moore echoed those feelings and said: “He missed his break. The pace was slow but he wasn’t able to pick up speed in the end.”

Meanwhile in the US at Del Mar the Hollywood Derby almost saw Irish eyes smiling as Cork native Brendan Walsh's Santin came up just a neck short for Godolphin.

Beyond Brilliant made all to win for John Shirreffs and Kent Desormeaux.

Favourite Public Sector didn't get a clear run and switched right over a furlong out. He ran on inside the final furlong to be a nearest at the finish 4th.