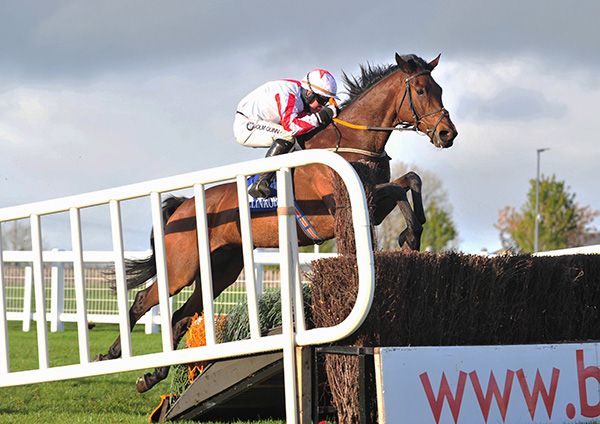 Luke Dempsey's mount was lobbing away in third on the outer approaching the final quarter of a mile. He arrived into the lead, on the bridle, before two out and readily asserted coming to the final obstacle.

The nine-year-old gelding ran around slightly before jumping it but negotiated it well and won very easily by six lengths at 11/2 for trainer Michael Butler. Ciankyle took second at 14/1 with Powersbomb six and a half lengths back in third also at 14/1.

Mickey Butler, former jockey and son of the winning trainer, said: “That outer chase track suited him as he has loads of scope and the ground is lovely.

“Luke gave him a lovely patient ride as they went a good gallop and it’s great to get another (win) after the last day.

“Harrington’s horse made a bad mistake at the last at Fairyhouse but our fella was still coming with a run that day.

“The owner, Anthony Coughlan, is a Cork man, who loves the day out, so it’s a pity he can’t be here. He’s a great supporter of ours and deserves the success as he’s been patient.”

The Stewards received a report from the Irish Horseracing Regulatory Board Starter, Mr. J. R. Banahan, that C.D. Maxwell, rider of The Echo Boy, J.C. Gainford, rider of Recent Revelations, P.E. Corbett, rider of Argumental, M. Hamill, rider of Veneziano Springs (FR), M. Bolger, rider of Ciankyle and H. Morgan, rider of Champagne Beauty had failed to obey his instructions at the start of this race, resulting in a false start. Evidence was heard from the starter and riders concerned. Mr. J. R. Banahan stated that as it was tight going out onto the track he instructed the riders to walk over to the rail and to walk to the marker poles. He added that the riders on the inside disobeyed these instructions and confirmed this in the video footage. C. D. Maxwell accepted that he had disobeyed the starters instructions and apologised to Mr. Banahan. J. C. Gainford accepted that he had failed to comply with the starters instructions. P. E. Corbett stated that he had disobeyed the starters instructions. M. Hamill stated that his mount was very fractious coming out onto the track but accepted that he was in breach of the rule. H. Morgan stated that his mount was difficult at the start but accepted that he was in breach of the rule. M. Bolger accepted that he was in breach of the rule and added that he could hear the starter loud and clear. Having viewed the recording and listened to the audio of the start and considered the evidence, the Stewards were satisfied that C. D. Maxwell, J. C. Gainford, P. E, Corbett, M. Hamill, M. Bolger and H. Morgan were all in breach of Rule 208. Having considered their respective records in this regard the Stewards suspended the above riders for one race day. In arriving at their decision, the Stewards acknowledged the honesty of all the riders concerned and were satisfied that the penalty imposed was proportionate.