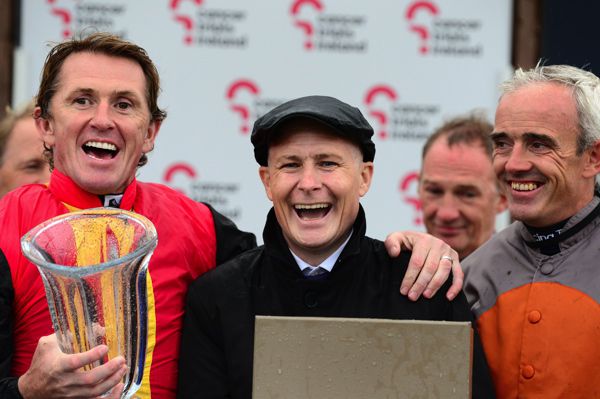 The outpouring of sadness and sympathy following news of the death of Pat Smullen at the age of 43 was a tribute not only to a nine-times champion jockey but also an inspirational figure in his battle with cancer.

Smullen rode over 1900 winners including the Epsom Derby on Harzand in 2016 but will be as much remembered for the brave way he faced illness and fundraised for pancreatic cancer.

He led the campaign which raised over 2.5 million euro mainly through the Pat Smullen Champions Race For Cancer Trials which brought together former stars from the flat and jumps on Irish Champions Weekend at the Curragh last year.

President Michael D Higgins led the tributes expressing his “deep sadness at the untimely death” and said the jockey’s “remarkable performances at home and abroad brought joy to so many.”

Brian Kavanagh, chief executive of Horse Racing Ireland, said “Pat was one of our greatest stars. He was nine-times champion jockey, but in many ways his greatest achievements were out of the saddle.

“Since his diagnosis, he did wonderful work fund-raising for charity and he battled this disease with great heart and it’s hard to believe he has passed at such a young age. All our thoughts are with Frances and his three children, Hannah, Paddy and Sarah, and all his friends and colleagues in the weighing room.

“It’s a really sad day for Irish racing. Pat was one of the finest men you could hope to meet. There’s been such a reaction around Irish racing and such a degree of shock, which shows the high regard in which Pat was held.

“He was a pleasure to have anything to do with — his achievements in the saddle were one thing, but his qualities outside of it were something else.

“He was a global figure in racing, but his reaction to his diagnosis and the fund-raising he did last year in particular was really wonderful.

“An inspiration to us all, his legacy is large.”

Former jockey and now broadcaster Mick Fitzgerald said, “Pat was not only a brilliant rider but a brilliant man. I can’t even begin to think what his family are going through at this stage because they have lost an absolute gem.

“He was a gentleman and it’s a very sad day for racing.”

Trainers Gordon Elliott and Noel Meade were among many to pay their respects on twitter.

Elliott said, “So sad to hear of Pats passing. One of the greatest jockeys we’ve ever seen and above all a true gentleman who I was fortunate enough to know.”

Meade summed up the feelings of most when saying, “We’re devastated and it’s true, the good die young. He was a star man and our thoughts and prayers are with Frances and their children. RIP Pat, heaven has gained a champion.”